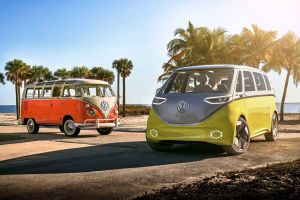 Volkswagen has toyed around with the idea of bringing back the emblematic Bus for the past 16 years. Four concept cars later, the company has finally confirmed plans to launch a retro-inspired van in 2022. The yet-unnamed model will take inspiration from the I.D. Buzz design study introduced earlier this year at the Detroit Auto Show.

“After the presentations at the global motor shows in Detroit and Geneva, we received a large number of letters and emails from customers who said, ‘please build this car.’ The Microbus has long been part of the California lifestyle. Now we’re bringing it back by reinventing it as an electric vehicle,” explained Volkswagen CEO Herbert Diess in a press release.

The I.D. Buzz will ride on the modular MEB platform Volkswagen is currently developing to underpin an array of electric vehicles, including an oh-so-popular crossover and a hatchback that will replace the e-Golf. The MEB underpinnings means the van will be electric-only; Volkswagen won’t offer gasoline- or diesel-powered variants of it. A single rear-mounted electric motor and rear-wheel drive will come standard, while optional all-wheel drive will be available by installing a second electric motor over the front axle.

The battery pack will be integrated into the van’s floor. Early estimates claim it will offer up to 373 miles (600 kilometers) of driving range, though that figure was calculated using projections based on the notorious optimistic European testing cycle. Battery technology is advancing at a rapid pace, however, so don’t expect to hear a final range figure until 2020 at the earliest. 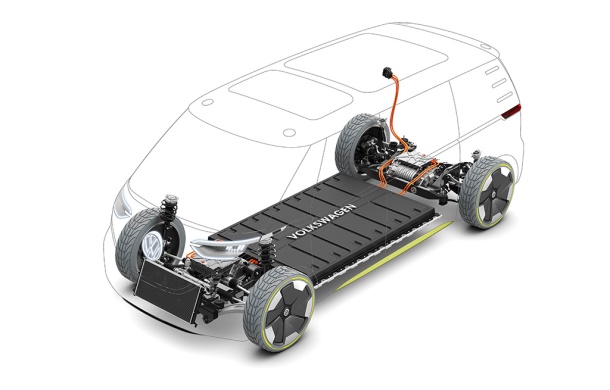 The heritage-laced lines penned as a tribute to the original split-window Bus and the futuristic, lounge-like interior will both make the transition from concept to production. The model will remain connected and highly automated, too.

“Based on the new all-electric architecture, the production version of the I.D. Buzz will incorporate many design ideas from the concept car, including multi-variable seating, interactive connectivity, and highly automated driving,” Volkswagen said in a statement.

Interestingly, Volkswagen also confirmed it will offer at least two variants of its 21st century Bus. The first will be a passenger van similar to the I.D. Buzz concept (pictured above and below). The second will be a panel van aimed largely at commercial buyers. Volkswagen is eager to capitalize on its heritage, so we wouldn’t be surprised to see a Westfalia-esque camper model join the lineup a little later in the production run.

Time flies, but 2022 is still a ways away. The time frame suggests the I.D. Buzz — a name that won’t be retained on the production model — might not arrive in the United States until the 2023 model year. And while Volkswagen stresses it’s developing the model for buyers in Europe, North America, and in China, there’s no word on where it will be built yet.

One thought on “News: Volkswagen confirms Bus-inspired EV coming in 2022”