These days, a split-window Volkswagen Bus is worth as much as a house. Folks rent choppers to pull them out of damp Scandinavian forests where they’ve been sinking into the ground for decades. Once restored, they’re usually tucked away in a heated garage and taken out for car shows, special occasions, or high-brow auctions. Broadly speaking, the days of road-tripping in a Bus are over.

I spotted an exception to the rule on a recent work trip to Barcelona, Spain. The Bus you see below was casually street-parked a few minutes’ walk away from downtown. It’s registered in Rome, Italy, and I have every reason to believe it was driven up the coast, through France, and down into Barcelona. Clearly, it’s in sound mechanical shape. The body’s not bad, either. It’s not rusty, and it shows no signs of sketchy repairs carried out when these were still considered beaters.

My favorite part of this Bus is the little piece of paper glue to the driver’s side window. It reads “alarme: je suis pres d’ici, et t’ecoute.” In French, that means “alarm: I’m close to here, and I’m listening to you.” And you know what? The guy is completely serious. While I was taking pictures he shouted “you like my van, don’t you?” in Italian from across the street. 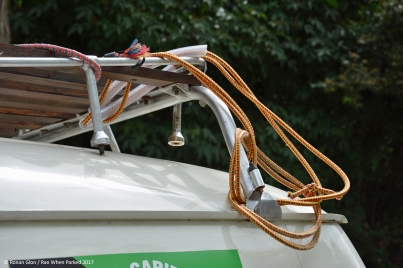