OMG! Some dude abandoned this SEAT Ibiza ten years ago and — holy Toledo! — you literally will not believe what happens next! Welcome to Ran When Parked, Buzzfeed-style.

The SEAT Ibiza pictured below is ending its days in the picturesque French Alps. It’s sitting on the side of an abandoned repair shop, and registration stickers on the windshield indicate it was last on the road between 2006 and 2008.

Both license plates are missing, so we can’t tell precisely when this Ibiza was first registered. However, it’s a face-lifted model, which means it was one of the last examples of the first-generation Ibiza built. It rolled off the assembly line in the early 1990s, and with over 285,000 kilometers (177,000 miles) on the clock we can’t say it’s been used sparingly.

The timing belt sitting in the passenger-side footwell shed insight on why it was parked. We’re guessing it broke down on a trip to the Alps and it was towed to the shop we found it at by default. There’s really not a whole lot else in the area; when it was still open, it was one of the only repair shops for miles.

If the timing belt came off, it’s safe to bet the 1.2-liter four-cylinder’s head did, too. Maybe it overheated in the mountains? Regardless, the repairs ended up being too costly. The owner left the car on-location and found another way home. No one bothered selling it or scrapping it when the garage shut down.

Our theory might sound a little bit far-fetched, but it wouldn’t be the first car we’ve found abandoned after a costly breakdown far from home, and it probably won’t be the last. 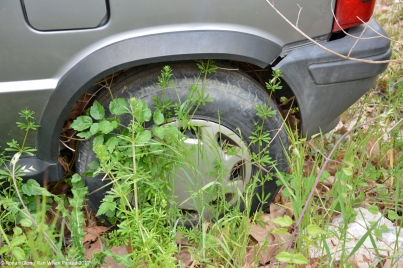 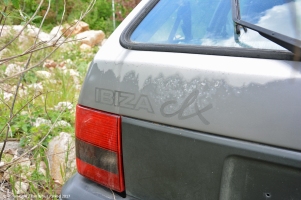