The Lada Niva has been in continuous production for 40 years. The Russian company is celebrating this uncommon milestone by launching a limited-edition version of the off-roader appropriately named 40th Anniversary Edition that’s a little more — dare we say it — upscale.

Production of the commemorative model is limited to just 1,977 examples, a number chosen because 1977 was the Niva’s first full year on the market. Interestingly, some of the 40th Anniversary cars receive a camouflage paint job, while others are offered in beige, red, white, terracotta, or gray-blue. Camouflaged cars ride on black steel wheels, but the more civilian-looking ones receive edition-specific two-tone alloys.

Find shelter if you’ve ever said pigs will fly before Lada offers leather. The 40th Anniversary Edition gets what Lada refers to as eco-leather upholstery on the seats and on the steering wheel, and it even boasts contrast stitching. All told, it’s the most ostentatious factory-built Niva we’ve ever seen.

All 40th Anniversary Edition cars wear special emblems on the front fenders, on the tailgate, on the front seats, and on the glovebox lid. A metal plaque engraved with each car’s serial number reminds the occupants they’re not riding in a run-of-the-mill, proletarian-spec Niva. Clearly, this one’s for the fans.

The Lada Niva 40th Anniversary Edition will reach dealers in June. As of writing, it doesn’t sound like the off-roader will be sold outside of Russia. Pricing information hasn’t been announced yet.

The Niva most likely won’t live to see its 50th anniversary because development of a brand-new model is already under way. Official details are few and far between, but company CEO Nicolas Maure told French magazine Capital that the next Niva will be considerably more modern in every way than its predecessor, which is admittedly not a terribly difficult task to achieve. Notably, it will not be related to either the current or the next-gen Dacia Duster. 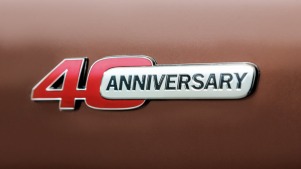