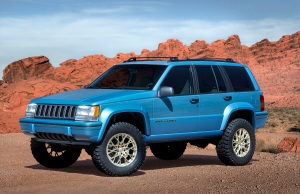 The original, ZJ-generation Grand Cherokee is turning 25 this year. Jeep is celebrating the occasion with a one-off concept named Grand One that puts a modern twist on the off-roader.

The ZJ’s lines have been updated with a concept-specific body kit that adds fender flares, cladding on the bottom parts of the doors, and side skirts. The Grand One rides on 18-inch alloy wheels wrapped by BFGoodrich Mud-Terrain tires, and it receives a two-inch suspension lift.

Modern-style emblems, a blacked-out grille, and a coat of metallic light blue paint round out the visual updates. Jeep replaced the carpet with a more durable bed liner-type material, and added a dashboard-mounted car phone to emphasize the 90s vibe.

Technical details are few and far between; all we know is that the Grand One uses a 5.2-liter V8 engine. If it’s stock, it generates 211 horsepower at 4,300 rpm and 295 pound-feet of torque at 3,000 rpm. A four-speed automatic transmission — which captures the 90s vibe just as well as the car phone — sends the eight-cylinder’s power to all four wheels.

The Grand One is one of six concepts unveiled today ahead of the annual Easter Jeep Safari in Moab, Utah. The one-off models usually shed insight into what the future holds for the Jeep lineup — for example, the Safari concept introduced alongside the Grand One is a very good indication of what the next-generation Wrangler will look like, at least when viewed from the front.

The Grand One is the exception to the rule; it’s simply a tribute to the original ZJ, not a preview of an upcoming model.