The Citroën 2CV helped motorize the masses in post-war France. However, a 73-year old document buried deep in the automaker’s archives department reveals how close the now-famous deux chevaux came to being replaced by the Volkswagen Beetle.

Citroën was on track to introduce the Type 2CV A (pictured right and below) during the 1939 edition of the Paris Auto Show, but the event was canceled when World War II broke out. Company officials asked that the 250 pre-production cars already assembled be scrapped as fast as possible so that the German forces wouldn’t see them. Most were destroyed — only four are left today — but it sounds like a few cars remained on the idle assembly line in Levallois, France. They inevitably caught the attention of the German engineers sent to check out the plant in July of 1940.

“The Germans asked us to hand over three cars,” explains the single-page document. Citroën officials were assured their design wouldn’t be copied because the cars would only be shown to Adolf Hitler and his aides, not to any of the nation’s automakers. In exchange, the German government would give Citroën its own version of what’s referred to in the document as “a people’s car,” and the company would be allowed to market it however it wanted to.

The terms of the proposed deal were never made public, so what the government wanted in exchange is anyone’s guess. However, the Germans were serious enough about letting Citroën build the Beetle in its factory for the local market that they were willing to send Ferdinand Porsche over to France to answer any and all technical questions about his creation.

Citroën remembers it immediately turned down the offer; there was no way it would abandon the TPV project, especially not to build Germany’s people’s car instead. Over the next year, German officials tried to convince Citroën to build the Beetle on at least six occasions, sometimes using threats as a means of persuasion, but executives never caved in.

As a last resort, the German government shipped one of its people’s cars to Citroën headquarters in Paris. The officials present when the car arrived insisted it be immediately covered up with a tarp, and they ordered everyone in the vicinity to ignore it and carry on as normal. Discouraged, the Germans took the car and left.

Germany’s attempts to build the Beetle in France were summarized in a typewritten letter on December 26, 1944. Unfortunately, it’s not signed so we can’t say who wrote it, or who it was destined for. However, the author explains the German forces’ repeated visits represent one of the reasons why the Type 2CV A was completely (and secretly) redesigned during the war. 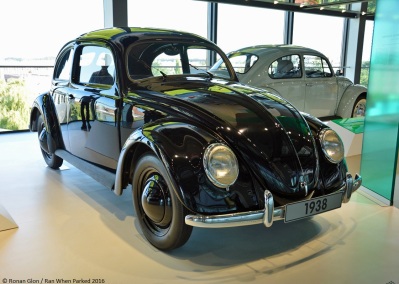