The original Mini wore dozens of names over the course of its long, illustrious production run. In the 1960s, the Austin 850 was an economy-focused model that buyers were likely to drive home in after visiting a dealer with a blank check in hand.

The example on display in the ZeitHaus museum is special because it’s the millionth Mini produced. It was built in February of 1965, just six years after the Mini first went on sale. British Motor Corporation opted to celebrate the milestone in a more low-key way than Volkswagen, and the commemorative Mini is largely stock save for a metal plaque on the right front fender. 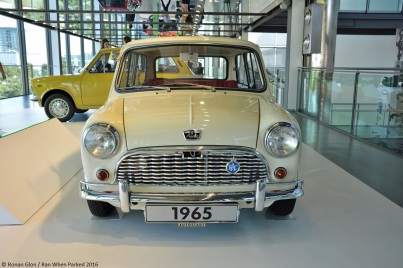