When it comes to off-roaders, I’ve gotten used to seeing worn-out Toyota Land Cruisers and Chevrolet K5 Blazers still putting around in the United States. Land Rover’s Series models are few and far between, and the remaining all-original examples are increasingly getting treated to a full restoration as their value steadily creeps up. I found the exception to the rule on the streets of Portland, Maine, last week.

Wearing countless battle scars, this long-wheelbase (109″ in Land Rover-speak) Series II stuck out like a sore thumb in a parking lot full of late-model crossovers and SUVs. That’s certainly not a bad thing: it’s by far the most interesting car I saw during my short trip to the largest city in Maine. While I didn’t manage to track down the owner to find out about its history, I’d wager it was originally sold new in the United States. 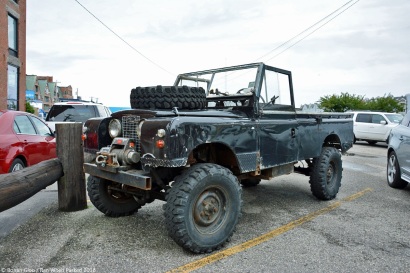