In 1979, auto journalist Bob Hall suggested Mazda produce a small two-seater roadster inspired by the rear-wheel drive Alfa Romeo, MG and Triumph sports cars that ruled the roads in the 1960s. Whether Hall accurately predicted the shrinking roadster market would all but collapse over the following years is a point of debate, but his advice was of paramount importance to Mazda’s future.

Although Mazda engineers were thrilled with the idea of an entry-level sports car, the bean-counters needed convincing. New car sales were picking up in the United States – the world’s largest auto market at the time – but there was little indication that roadsters were in hot demand. Consumers were primarily after family-friendly passenger cars that were relatively affordable and efficient to operate.

The project was hesitantly signed off when engineers convinced Mazda execs that launching a sports car would help the company stand out from rival automakers like Honda and Toyota. With management’s proverbial nod of approval, the first order of business was to decide whether the car would be front-wheel drive or rear-wheel drive. A mid-engined layout was also considered, and Mazda’s records indicate engineers briefly debated whether the MX-5 should land as a coupe or as a convertible. The one attribute that was immediately agreed upon was that the MX-5 had to be a lightweight car that would offer a pure driving experience. Designers were inspired by the term “jinba ittai,” which translates to “rider and horse as one” in Japanese, meaning the driver had to feel perfectly connected to the road at all times.

Mazda chose a front-engine, rear-wheel drive layout after several rounds of internal debate. It was not the most efficient route to take because it meant designing a new platform from scratch instead of using an evolution of an existing one, but it was voted the best way forward as engineers could make the car as light as possible from the earliest stages of development. The popular 2+2 layout was consequently ditched in favor of a simple two-seater configuration, and a manual soft top was chosen instead of a heavier, more expensive power-operated unit. 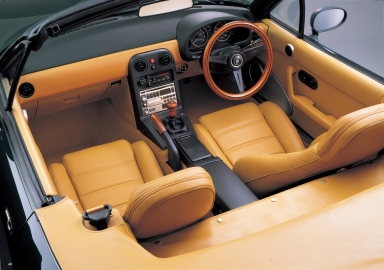 The bodywork had to be equally simple. The design process started at Mazda’s California studio, but it was transferred in 1986 to the firm’s headquarters in Hiroshima, Japan, where the final touches were applied. Mazda was still worried the MX-5 would be a flop because roadster sales made up a tiny part of the new car market so it displayed a plastic prototype in front of 220 potential American customers in April of 1987 and asked for opinions. 57 participants affirmed they would buy the car in a heartbeat if it was produced and reasonably priced, prompting Mazda to quickly move forward with launching the MX-5.

Largely aimed at the North American market, the MX-5 Miata was presented to the public for the first time at the 1989 Chicago Motor Show and went on sale in the United States shortly after. It was initially powered by a 1.6-liter twin-cam four-cylinder engine that sent 116 horsepower and 100 pound-feet of torque to the rear wheels via a five-speed manual transmission, enough to reach 60 mph from a stop in a respectable 8.8 seconds. Four wheel disc brakes and an independent suspension on both axles helped the driver make the most of the twin cam’s power.

The MX-5 tipped the scale at 2,182 pounds thanks to numerous weight-saving measures such as a hood crafted out of aluminum. Inside, the convertible boasted an uncluttered dashboard equipped with just the bare minimum level of equipment and an instrument cluster consisting of straightforward, easy-to-read analog gauges.

Members of the press unanimously wrote rave reviews about the MX-5; Motor Trend went as far as calling it “the best sports car buy in America” in its July, 1989, issue. Generally speaking, the biggest complaint was that the roadster could use more power, and Mazda addressed the issue in 1994 by installing a 1.8-liter four-cylinder that sent 128 horsepower and 110 pound-feet of torque to the rear wheels. In addition to providing more grunt, the new engine made the MX-5 fully compliant with the strict emissions standards that were phased in starting in 1994.

The original MX-5 Miata stayed in production with minor modifications until the second-gen model arrived in 1998. No body parts were interchangeable between the first- and the second-gen MX-5s but the overall silhouette stayed the same, a testament to how well the original design had aged. 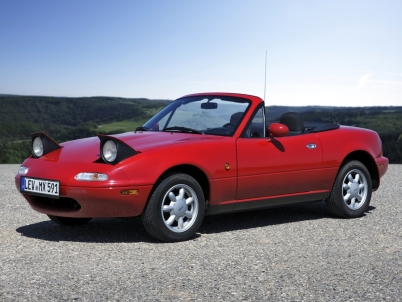 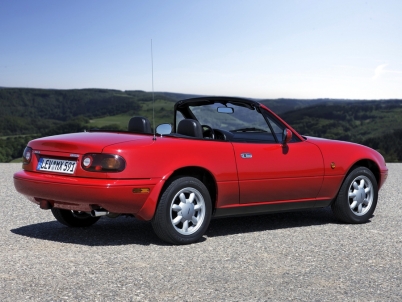 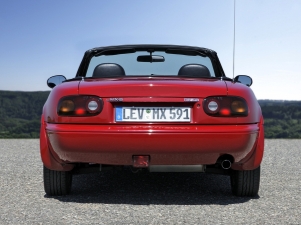 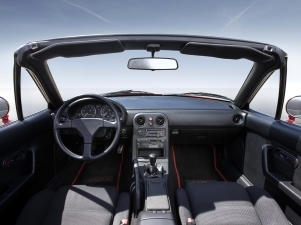