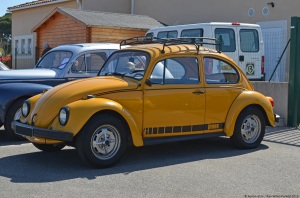 Volkswagen went on a special edition spree during the early 1970s. Some, like the 1303 Big and the 1303 S GSR, were aimed at the top end of the Beetle market, but the Jeans was based on the more affordable 1200cc model and targeted at young buyers.

Introduced in late 1973 as a 1974 model, the original Beetle Jeans was only offered in an eye-catching shade of yellow called Tunis Gelb (paint code L16M). It was easily distinguishable from the regular 1200 because both bumpers, the headlight bezels, the door handles, the mirror, and the trim on the belt line were all painted flat black. The finishing touch was a set of model-specific Jeans stickers above both rocker panels and on the deck lid.

Inside, the Jeans featured model-specific denim upholstery with matching door panels, a wooden shift knob, a passenger-side sunvisor, and a gas gauge integrated into the speedometer. A heated rear window and a Blanpunkt Wolfsburg radio came standard, while headrests for the front seats were available at an extra cost.

Volkswagen made no mechanical modifications, meaning the Jeans was powered by a 1,192cc air-cooled flat-four engine that sent 35 horsepower and 61 pound-feet of torque to the rear wheels via a four-speed manual transmission. Drums all around took care of stopping the car, and a 12-volt electrical system with an alternator was fitted as standard. The Jeans boasted a top speed of approximately 71 mph (114 km/h).

The Beetle Jeans proved popular among younger buyers, so the examples built in late 1973 sold out quickly. A second batch of cars that inaugurated more colors and a plastic dashboard was introduced in early 1974, and the name was dusted off and re-used several more times during the Beetle’s illustrious career. Notably, the limited-edition 2016 Beetle Denim that was introduced at last year’s Los Angeles Auto Show is a homage to the Jeans. 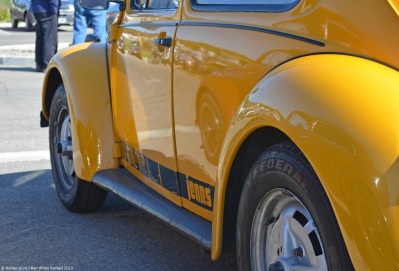 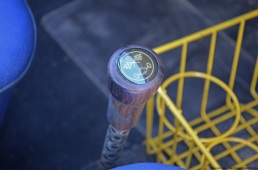 A big thank you to the owner of this all-original example for taking the time to let us photograph it inside and out.