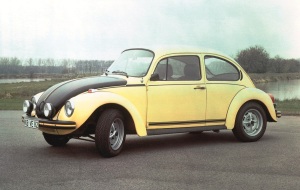 Volkswagen traveled to the 2013 edition of the Chicago Auto Show to unveil a limited-edition version of the 2014 Beetle called GSR. Finished in an eye-catching black and yellow paint job, the GSR was directly inspired by the 1303 S GSR that was introduced in Germany in late 1972.

The GSR acronym stood for Gelb Schwarzer Renner, which means Yellow Black Racer in Germany. As the name clearly implied, the 1303 S GSR’s body was painted in a shade of yellow called Saturngelb, while the trunk lid, the rear deck lid, and both bumpers were finished in flat black. 15-inch steel wheels mounted on 175-section tires gave the Beetle a rather dubious track-bred look.

Inside, Volkswagen installed more supportive sport seats for the front passengers, a three-spoke steering wheel, and a fire extinguisher. Features such as a clock, a volt meter, a radio, and seat belts could be ordered at an extra cost.

Volkswagen made no major modifications in the engine bay, meaning the GSR was powered by a 1.6-liter air-cooled flat-four that made 50 horsepower and a solid 78 pound-feet of torque. Bolted to a four-speed manual transmission, the flat-four sent the GSR from zero to 62 mph (100 km/h) in 18.3 seconds and on to a top speed of 81 mph (130 km/h). The engine was fitted with an oil cooler, so every GSR came with a slotted front apron that was identical to the one found on U.S.-spec cars.

Interestingly, all GSRs were delivered with a list of specialty shops that were approved by Volkswagen to tune the Beetle’s flat-four mill, though how many owners had their car modified is not known. Frankfurt-based tuner Oettinger wasn’t on Volkswagen’s list, but it nonetheless offered to squeeze 75 horses out of the flat-four by adding 200 cubic centimeters of displacement. 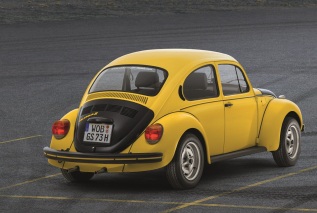 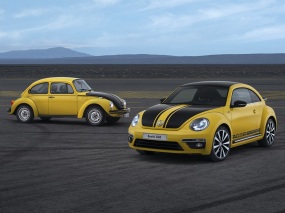