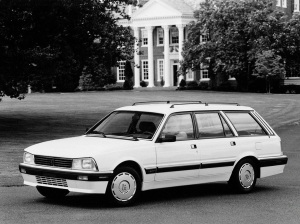 PSA Peugeot-Citroën is no longer in dire financial straits, and the Paris-based car maker is now looking at ways to boost its business by expanding its presence outside of Europe. One option that executives are currently discussing is a long-rumored return to the United States market after decades of absence.

“Our ‘Back in the Race’ restructuring program has been successfully completed. Now comes the next step. And this has put the issue of the U.S. on the table,” affirmed Yves Bonnefont, the boss of DS Automobiles, in a recent interview with German trade journal Automobilwoche.

That doesn’t necessarily mean you’ll be able to buy the next-gen Citroën C5 in Salt Lake City, Utah. Returning to the United States after such a long absence is easier said than done because Peugeot-Citroën no longer has a dealer network, and — more importantly — it doesn’t have a factory in North America. That means it would presumably have to pass the cost of importing its cars from Europe to buyers, and the C5 you’re looking for in Salt Lake would end up markedly more expensive than a comparable Passat. Faced with the same issue, Volkswagen ultimately decided to build an assembly plant in Chattanooga, Tennessee.

The solution appears to be clear: PSA’s newly-independent DS division will likely spearhead the group’s return to the United States. DS-badged cars will be more expensive than Peugeot or Citroën models, so it’ll be easier for PSA to offset the cost of shipping them from Europe. DS is still in its infancy, but the company hopes to take on well-established premium car makers like Lexus, Mercedes-Benz, and BMW by launching six brand new models before the decade draws to a close. All of them will be developed with global markets in mind, meaning they won’t be exclusively tailored to European tastes. The expansion will include replacements for the current DS 3, 4, and 5 models, a flagship sedan tentatively called DS 9, and at least one crossover. At the time of writing the stylish all-electric E-Tense concept shown earlier this month at the Geneva show is merely a design study, and it hasn’t been given the proverbial green light for production.

More details about PSA Peugeot-Citroën’s potential return to the United States will be announced on April 5th when executives hold a press conference to detail the group’s international growth strategy. Nothing is official yet, but it’s not too far-fetched to assume DS-branded cars won’t land in the U.S. until 2020 at the earliest. Peugeot- or Citroen-badged models are at least another five years away, assuming they make it across the Atlantic in the first place.

2 thoughts on “News: PSA Peugeot-Citroën is considering returning to the United States”