I found the first-generation Renault Clio pictured below while hiking in the woods a couple of years ago. There were no plates on it and it was fairly well hidden so it’s not too far-fetched to speculate that it was stolen, taken for a joy ride through the mountains, and dumped out of sight. It looked relatively complete — surprisingly, no one showed up to grab the purple door panels!

It was kind of odd to stumble upon a first-generation Clio in the woods because I’m used to finding much older cars that have been sitting for decades. However, the original Clio was launched over a quarter of a century ago; you could legally import one to the United States if you wanted. It hasn’t reached classic status yet, but it’s definitely old enough to get dumped in the woods.

The Renault 4 is becoming increasingly sought-after, and the Citroën 2CV is already worth a small fortune. Inevitably, finding an abandoned 4 or a forgotten 2CV is going to become more and more difficult in the coming years. Cars like the Renault Clio, the Peugeot 106, and the second-gen Volkswagen Polo are already starting to replace the 2CV in woods, in ditches, and on cinder blocks in backyards. All told, this is likely what Ran When Parked will look like in a decade. 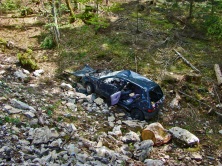 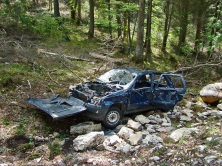 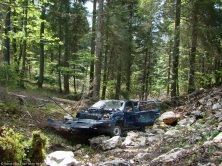