Jeep is celebrating its 75th birthday this year. As Dan from Hemmings accurately pointed out a couple of weeks ago, the company is arguably a little older than 75 because the first Bantam prototypes — which heavily influenced the series-produced Willys MB that fought in World War II — were built before 1941, but that’s a different story for a different time.

75 or not, Jeep shipped three classics from its collection to this year’s edition of the Geneva Auto Show. The first model is, unsurprisingly, a remarkably clean example of the aforementioned Willys MB that was prominently parked on pieces of wood right in the middle of the Jeep stand. The MB is a monumentally important car because it spawned the CJ-2, the first Jeep developed for civilian use. 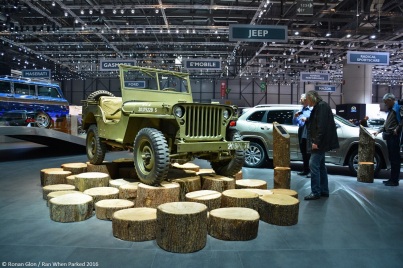 The second model is a Willys Station Wagon. Launched after the war, it shared a few styling cues with the Willys and the CJ-2 but it featured a closed cab capable of carrying a family and a weekend’s worth of gear. Notably, the body was entirely made of steel; many station wagons sold in the U.S. at the time still had wooden body panels. Four-wheel drive was offered at an extra cost so, in many ways, the Station Wagon was one of the very first SUVs.

Finally, Jeep showed a Wagoneer built during the 1970s. Rugged, spacious, and durable, the Wagoneer — later called Grand Wagoneer — appealed to families who needed a station wagon on stilts that could drive through a foot of snow or tow a boat. Production ended in 1991 after 28 continuous years, and the Grand Cherokee has been positioned at the top of the Jeep lineup ever since. However, the company is busily developing a new Wagoneer that insiders say is shaping up to be an American Range Rover. The off-roader is tentatively scheduled to launch in 2018. 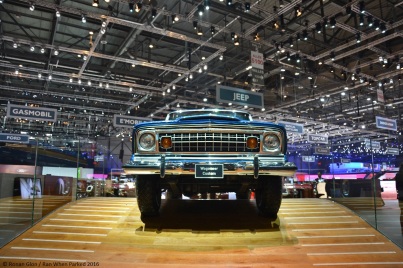 One thought on “Live from the Geneva Auto Show: Jeep celebrates its 75th birthday with a trio of classics”