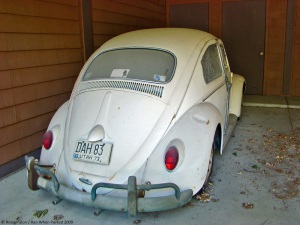 In 2009, a good friend asked me to drive him to his landlord’s house to drop off a check because his car was in the shop. The landlord lived in a back street just a stone’s throw from the University of Utah campus in Salt Lake City. I’d never noticed the street — let alone driven down it — even though I was a full-time student back then.

A white pre-1967 Volkswagen Beetle parked in a car port caught my eye before we got to the landlord’s house. A closer look revealed that it wasn’t in great shape: many of the windows were busted and covered with duct tape, the passenger-side door was held shut with duct tape, and the Beetle had been involved in a minor fender-bender up front. I couldn’t tell what condition the interior was in because it was full of boxes and I didn’t want to un-tape the only door I had access to, but I looked under it and the pan was fairly solid. All told, it was pretty well preserved because it had been kept away from direct sunlight and from Utah’s harsh winters.

I put my automotive archaeologist hat on and quickly pieced together a good chunk of the Beetle’s history. It was built between August of 1962 and August of 1963 because it didn’t have the Wolfsburg crest on the hood but it was still fitted with the small license plate light on the deck lid. A parking permit on a corner of the windshield indicated it was owned by a student at Rutgers University in New Jersey in 1967 and 1968. The Utah plates were issued in 1973, and the U of U student parking permit on the back window expired on September 30th, 1973. Finally, a Utah registration sticker on the windshield told me the car was still on the road in 1975. There was nothing later than that so odds are that’s when it was parked.

A neighbor pulled up as I was taking the first few photos below. She didn’t know if the car was for sale but she pointed me to owners’ apartment and stressed that everyone in the building would be absolutely thrilled to see the Beetle leave because it was an eyesore and it was taking up one of the few available covered parking spots. No one answered when I knocked on the door so I left a note in the mailbox, but I never heard back from the owner.

I lived very close to downtown SLC at the time so I made it a point to drive past the Beetle a couple of times a year to check up on it (the last few photos were taken in 2011), but it never moved and I never saw anyone tinkering with it — clearly, it wasn’t a project car. About two years ago I went back with my SLR camera to take better pictures of it and to leave another note in the mailbox. I turned right on the narrow street it lived on, drove for about 100 yards, looked left, and saw a red first-generation Dodge Durango in the car port. 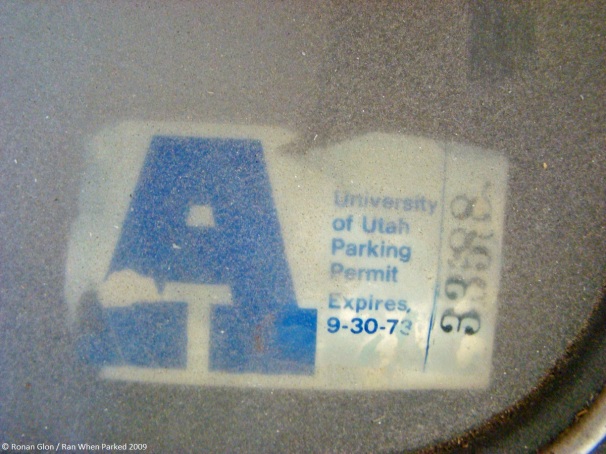