Mercedes-Benz introduced the Lo 2000, the world’s first diesel-powered light duty truck, in 1932. It quickly became evident that compression ignition offered several key advantages over the gasoline-burning mills of the era, so engineers began studying ways to build a smaller diesel-powered engine and install it under the hood of a passenger car.

Early experiments weren’t particularly successful. Mercedes remembers its engineers initially built a 3.8-liter diesel-burning straight-six fitted with an indirect injection system. The six-banger vibrated so much that it ended up breaking the frame of the test car it was installed in. The design department went back to the drawing board and developed a much smaller 2.6-liter four-cylinder that generated 44 horsepower at 3,000 rpm. It was bolted to a four-speed manual transmission that spun the rear wheels. 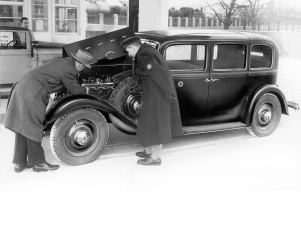 Mercedes introduced the 260D — the world’s first regular-production diesel-powered passenger car — at the 1936 edition of the Berlin Auto Show. Available in several body styles including a sedan (pictured) and as a convertible, the 260D became a favorite among taxi drivers because it was efficient, it offered space for up to six passengers, and it was reliable. Sales were further boosted by the fact that diesel was usually cheaper than gas in Germany, and because the four-banger was reputed to last for well over 62,000 miles (100,000 kilometers), an impressive figure eight decades ago. It had a top speed of roughly 60 mph (95 km/h).