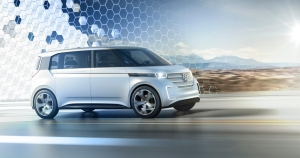 Volkswagen has traveled to the annual Consumer Electronics Show (CES) in Las Vegas, Nevada, to introduce a new concept called Budd-e that’s loosely billed as the Bus of the 21st century.

The Wolfsburg-based car maker has toyed around with the idea of bringing back the Bus before. Notably, Volkswagen showed the Microbus concept at the 2001 edition of the Detroit Motor Show, and the Bulli concept at the 2011 Geneva Motor Show. While the two aforementioned concepts boasted a heritage-laced design, the Budd-e looks markedly more modern and the only real visual connections it has with the original, rear-engined Bus are a V-shaped front end and flared D-pillars.

The concept stretches 181 inches long, 76.3 inches wide, and 72.2 inches tall, dimensions that position it right between the Touran and the Transporter. Its front end is characterized by a wide grille with three illuminated slats and an oversized Volkswagen emblem, LED headlights, and an exceptionally short overhang. Out back, the Budd-e gets thin LED tail lamps connected by a third brake light and a roof-mounted spoiler installed to give it a sportier silhouette.

Volkswagen has one last retro-flavored surprise: the Budd-e’s multi-function steering wheel is vaguely modeled after the two-spoke unit that came standard on select Mexican-built Beetles. Of course, it wouldn’t make sense to introduce the concept at the CES show if it wasn’t full to the brim with the latest in-car tech and connectivity features. Highlights include a feature that lets the driver know if he or she has forgotten an item in the car, and a gesture-controlled infotainment system displayed on a massive screen that takes up over half the dashboard.

Power comes from an all-electric drivetrain that consists of a motor mounted over each axle. The drivetrain’s power output hasn’t been released yet, but Volkswagen promises the four-wheel drive Budd-e can drive for up to 373 miles (roughly 600 kilometers) on a single charge thanks to recent advances in battery technology. The van is built on a new architecture called Modular Electric Platform (MEB in Volkswagen-speak) that was developed specifically to underpin electric vehicles.

The Budd-e is just a concept for the time being, but Volkswagen isn’t shy about admitting that it could spawn a production model before the end of the decade. What we know for sure is that is that the MEB platform will underpin a full range of electric Volkswagen (and, possibly, Audi models) starting in 2019. 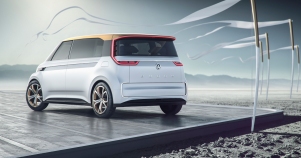 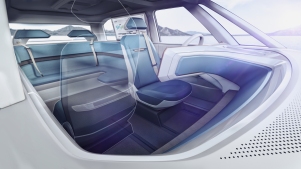 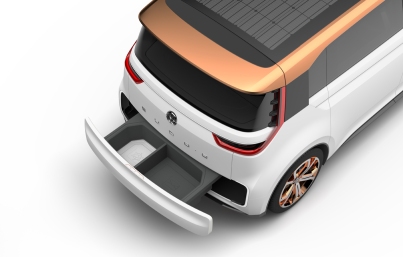