Last September, I stopped to photograph a boat named Crosby that’s slowly sinking in the Gothenburg harbor. No one could tell me the story behind the Crosby so I wasn’t able to figure out how long it had been there for, but I assumed the city would have it removed rather quickly.

When I returned to Gothenburg earlier this month, I made a small detour to the harbor to check up on the Crosby and, sure enough, it’s still sinking. The water has completely submerged the deck, and it looks all that’s keeping it from going under are a handful of ropes. Like I’ve already mentioned, I’m not a boat expert by any means but I’d say the Crosby certainly doesn’t look stable, and I wouldn’t recommend hopping on it to check out what the cabin looks like. 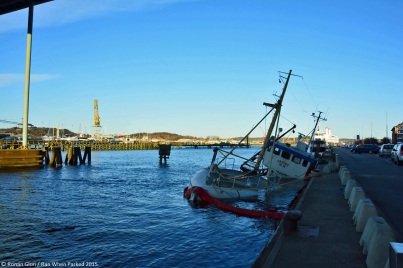