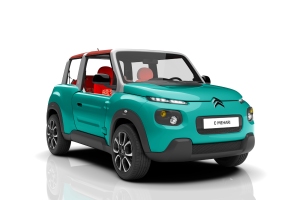 The Cactus M Concept that Citroën presented last September at the Frankfurt Motor Show was billed as a 21st century interpretation of the Méhari. It was also presented as a design study that could easily make the transition from concept to production, leading to speculation that the back-to-the-basics beach car was about to make a comeback after a decades-long hiatus.

Citroën has delivered on its promise.. sort of.  The Cactus M concept has been toned down to become the E-Méhari, but it doesn’t take a seasoned auto industry analyst to tell the two share little more than vague styling cues. While the Cactus M was based on the Cactus crossover, the E-Méhari is little more than a re-badged Bolloré Blue Summer.  Never heard of it?  Don’t worry, most folks in France – where it’s built – haven’t either.

While the front end is Citroën-specific and designed to look like the Cactus, the rest of the body panels are borrowed from the Blue Summer. Citroën hasn’t published pictures of the cockpit but judging by the overhead shot it’s standard Bolloré fare save for the bright upholstery that’s carried over from the concept.

Similarly, full technical details aren’t available.  All we know at this point is that the E-Méhari uses an all-electric drivetrain designed by Bollore that’s made up of an electric motor and a lithium-metal-polymer battery pack. It has a total driving range of about 120 miles (200 kilometers), and it can reach a top speed of 68 mph (110 km/h). Ironically, the top speed is perhaps the most retro-inspired part of the E-Méhari. The original Méhari, which launched in 1968 with a 602cc air-cooled flat-twin engine, could reach a top speed of 65 mph (106 km/h).

Assembled in Rennes, France, the Citroën E-Méhari is scheduled to go on sale next spring, though pricing information hasn’t been announced yet.  Similarly, we don’t know if it will be sold outside of France.

On one hand, we applaud Citroën for thinking outside of the box and venturing off the beaten path.  On the other hand, what was wrong with the Cactus M?  It was a lot bolder, a lot more innovative, and a lot closer to the original Méhari, at least in spirit.  We’re not against bringing back old nameplates but, as enthusiasts, we’d prefer not to see the Méhari moniker affixed to a re-badged version of a vehicle that’s half car, half golf cart and that no one is buying.

One thought on “News: Citroën looks to the past with the E-Mehari, but its vision is blurred”