I still don’t know what’s the marine version of ran when parked. Sailed when anchored? Floated when moored? The last one sounds like it fits the bill. Regardless, we’re leaving behind the world of cars for a day to take a look at a boat abandoned in the Gothenburg, Sweden, harbor.

I photographed the boat shown below last September. Don’t let the freeway bridge fool you, it’s not in a sketchy, far-removed area of the city. It’s a stone’s throw from downtown, right next to offices, a few hotels, and even a couple of posh restaurants. Most of the windows are broken so I’m guessing it was vandalized before it started sinking, and the net around it seemingly indicates the city (and/or the owner?) is aware of what’s going on. I’m not a boat expert by any means but it doesn’t look like it’s stable — I wouldn’t recommend jumping on it to snap a few pics of the interior.

I asked a few locals about the boat but no one could tell me what its story is. Interestingly, a jogger came up to me while I was taking the photos you see below and excitedly asked if the boat was mine. He’s apparently been trying to get to the bottom of the story for quite some time. I’ll be back in Gothenburg next week for a few days, I’ll swing the boat and see what shape it’s in today if I have time. 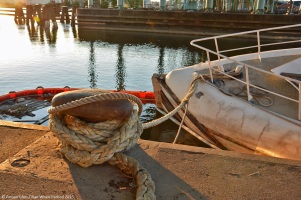 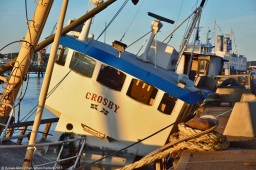 3 thoughts on “Floated when moored: The Crosby in Gothenburg, Sweden”