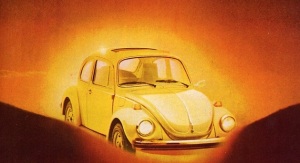 The Volkswagen Beetle single-handedly fought off all other European econoboxes in the United States during the 1960s, but the hunter became the hunted when small, efficient Japanese cars started growing in popularity in the 1970s. In order to combat dropping sales, Volkswagen launched several Beetle-based special editions that featured special color combinations and an unusually long list of standard equipment. One of them was the Sun Bug, which landed in U.S. showrooms in 1974.

Available as a standard Beetle, a Super Beetle and a Convertible, the Sun Bug was billed as a car that could turn even a mundane trip to the store into a holiday. Volkswagen’s marketing department went all out, and the brochure even included the lyrics to a song called “Let a Little Sunshine Into Your Life!” written by Keith Connes specifically for the car.

Beetle and Super Beetle-based models came with a manual sunroof, and the latter’s even featured a white air deflector. All Sun Bugs sat on the same 15-inch steel wheels that were found on other Beetle-based limited editions launched during the 1970s, and they were offered in an eye-catching shade of gold called Harvest Gold Metallic (paint code L99B). Some models wore a dealer-installed plastic Sun Bug emblem on the rear deck lid and black Sun Bug decals above both rocker panels.

Inside, the Sun Bugs came with a padded four-spoke steering wheel, full carpeting, adjustable sport seats and a model-specific shift knob. A locking glove box and a rear window defroster came standard, and Super Beetle- and Convertible-based models turned the posh dial up to 11 by offering leatherette inserts in the front seats and Rosewood trim on the dash. Buyers could further spruce up their car by selecting from a wide variety of accessories including a plastic center console between the front seats.

Volkswagen made no changes in the engine bay. Beetle-based Sun Bugs were powered by a 1.6 liter air-cooled flat-four that made 46 horsepower and 72 lb-ft. of torque, and Super Beetle- and Convertible-based models packed a 1.6-liter flat-four rated at 60 horsepower and 77 lb-ft. of torque. All models featured a four-speed manual transmission that spun the rear wheels.

To make the Sun Bugs more attractive, Volkswagen added its Owner’s Security Blanket with Computer Analysis, a new-for-1974 package comprised of a warranty and a maintenance deal that included a computer diagnostic process.