Paris-based Peugeot took the first step towards building a hot hatch in 1976 when it introduced a warmer version of the 104 city car. Dubbed 104 ZS, it used a 66-horsepower 1.1-liter four-cylinder engine that allowed it reach 62 mph (100 km/h) from a stop in 12.4 seconds. That doesn’t sound like a lot today, but it was a fairly respectable statistic four decades ago, especially for an economy-focused hatchback.

At about the same time, Peugeot’s interest in motorsport was growing steadily and company officials decided to develop a true hot-rodded version of the 104 to compete in Group 2 racing. Class regulations dictated that 1,000 street-legal examples of each race car had to be built before it was approved for competition, so Peugeot quickly got to work on what would become known as the 104 ZS 2. Unlike the original ZS, which was essentially a tuned economy car, the ZS 2 was a full-on street-legal race car.

Power came from a 1.4-liter four-cylinder engine that used a pair of double-barrel Solex carburetors to make 93 horsepower and 91 lb-ft. of torque. To put those figures into perspective, the Renault 5 Alpine (sold as the 5 Gordini in the United Kingdom) was equipped with a naturally-aspirated 1.4-liter four-banger that delivered 93 ponies and 84 lb-ft. of twist.

The extra power helped the ZS 2 sprint from zero to 62 mph in 10.9 seconds — about two seconds slower than the 5 Alpine — and go on to a top speed of 109 mph (about 175 km/h). A four-speed manual transmission sent power to the front wheels.

Exclusively offered in gray with contrasting red stripes right below the belt line, the ZS 2 stood out from the regular ZS thanks to discreet add-ons such as fender flares on all four corners and a prominent spoiler up front. 13-inch three-lug alloy wheels manufactured by Amil added a finishing touch to the oft-imitated race-ready look. Although the ZS 2 looked strikingly similar to the regular 104 when it was viewed from the outside, very few parts were interchangeable between the two.

Peugeot stripped the ZS 2’s cockpit of all equipment deemed superfluous in order to keep weight in check. As a result, the ZS 2 tipped the scale at merely 1,720 pounds (roughly 780 kilos) but it didn’t come with a clock, an oil pressure gauge, or a temperature gauge. The tach was planted right in the middle of the dash, seemingly added there as an afterthought.

The ZS 2 was exclusively available in 1979, and it carried a base price of 38,000 francs before options (such as a more complete instrumentation) were factored in. By comparison, that same year a Volkswagen Golf GTI cost 40,500 francs and a better-equipped (but slower) 104 ZS retailed for 30,700 francs.

Rumors circulating around the media claimed that the ZS 2 would be added to the Peugeot catalog as a regular-production model in 1980. The reports were false; Peugeot built the 1,000 examples it needed to homologate its new race car and not a single more. However, a de-tuned version of the engine was ultimately shoe-horned under the hood of the ZS. 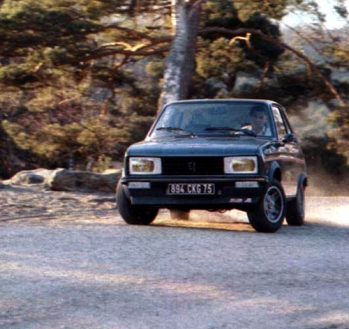