The chopped-up Saab 900 we featured last week wasn’t alone. There was a relatively clean beige 99 sitting right next to it, and a more far-gone 99 EMS parked just a few feet above it. Time was limited, so we chose to shoot the EMS.

The EMS looked black from a distance but a closer inspection revealed that it started life painted in that wonderful shade of metallic orange that was a popular choice among Saab buyers during the 1970s. The interior was completely stripped so we couldn’t tell if it once had matching orange seats.

It’s hard to tell what the story behind all of these cars is — some might be projects, but it looks like the EMS has been used as a parts car, getting it back on the road would be easier said than done. It was largely complete under the hood but most trim pieces, the turn signals, the front bumper, the grille and the lights on both ends were all missing. Interestingly, much like the aforementioned chopped-up 900, the EMS likely spent years rotting in a damp place before being towed to the spot where we found it. It’s worth noting that it was a lot rustier than it appears in the photos. 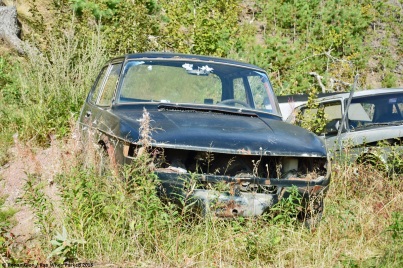