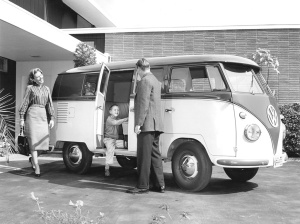 Volkswagen raised eyebrows when it introduced the retro-inspired Concept 1 in 1994. The well-received show car spawned the New Beetle just a few years after its debut, so enthusiasts reasonably expected the 2001 Microbus concept to morph into a modern day Bus.

The on-again, off-again project was ultimately canceled, but a new report coming out of England finds a successor to the iconic Bus will see the light of day before the decade draws to a close. According to British magazine Autocar, the upcoming people-mover will be previewed by a thinly-veiled concept that will be shown to the public next January at the Consumer Electronics Show, of all places.

Positioned below the Transporter, the yet-unnamed concept will reportedly borrow more than a few styling cues from both the original Bus and the Microbus concept (pictured below).

Those hoping to find a carbureted, flat-four air-cooled engine under the rear deck lid will be disappointed. Power will allegedly come from an all-electric drivetrain that will offer a total driving range of up to 310 miles (500 kilometers). Built using components designed by Audi, the drivetrain won’t be as experimental as it might sound because it will gradually be offered in select members of the Volkswagen lineup shortly after the concept is presented.

The production version will be built in Puebla, Mexico, starting in 2017, and Volkswagen insiders expect that its main market will be the United States. The electric drivetrain might make the jump to production, but the van will also be offered with turbocharged gasoline- and diesel-burning engines borrowed from the Volkswagen parts bin.

The fact that Neusser talked what a modern Bus would look like in the first place is telling, but we’re understandably taking Autocar‘s report with a grain of salt. However, if the rumor turns out to be true, expect to hear more about the new Bus in the weeks leading up to next year’s CES show.

4 thoughts on “News: Volkswagen could launch a retro-styled van before the end of the decade”