Mercedes-Benz and AMG mastered the art of shoe-horning large-displacement engines into big, comfort-focused sedans during the 1970s. BMW also built powerful sedans capable of taking the German Autobahn by storm, but the horsepower war between the two rivals didn’t seriously pick up steam until the mid-1980s with the launch of the Cosworth-tuned 190E 2.3-16 and the original M3.

After introducing several seriously powerful but low-production versions of both the w124 and w210 E-Classes during the 1990s, Mercedes-Benz and AMG took a well-aimed shot at the M5 with the E55 that was introduced in 1998. It wasn’t the most powerful variant of the w210 ever offered, but critics agreed that it boasted a blend of performance, luxury and everyday usability that no other E-Class had offered up until this point.

In Europe, AMG built both sedan and wagon variants of the E55, though only the former was offered in the United States. Much like its predecessors and the BMW M5 (E39), its arch rival, the E55 retained a relatively discreet appearance. The major visual cues that differentiated it from a stock w210 were essentially limited to a lowered ride height, a full body kit that include deeper bumpers and side skirts, and 18-inch alloy wheels. The cockpit was spruced up with a four-spoke steering wheel, sport seats and custom upholstery. Equipment varied from market to market, though the U.S.-spec cars were generally better equipped than Euro-spec models. 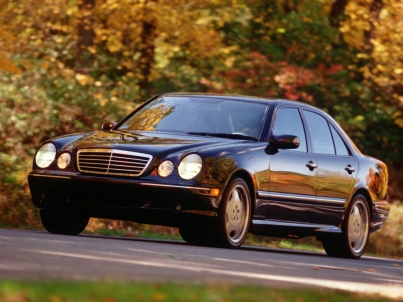