As a follow-up to an article we published over two years ago, we’re taking a look at vintage aftermarket accessories that motorists could buy to go faster, stop sooner or simply spruce up their car. The components below were all found in issues of French magazine L’Automobile published between 1960 and 1970.

Delta-Mic was one of the many companies that built wider rims for a long list of European cars. The ad claims they can be fitted to BMW, Ford, Lancia, Mercedes, Opel, and even Volvo models, but we’ve personally only seen them on Renaults, Simcas and the occasional Fiat.

Forcyl sold a sealant designed to prolong the life of an engine. According to the ad, you simply remove your spark plugs, pour a little Forcyl in each cylinder, wait half an hour and you’re good to go. It allegedly fills scratches associated with normal wear and tear as it hardens. 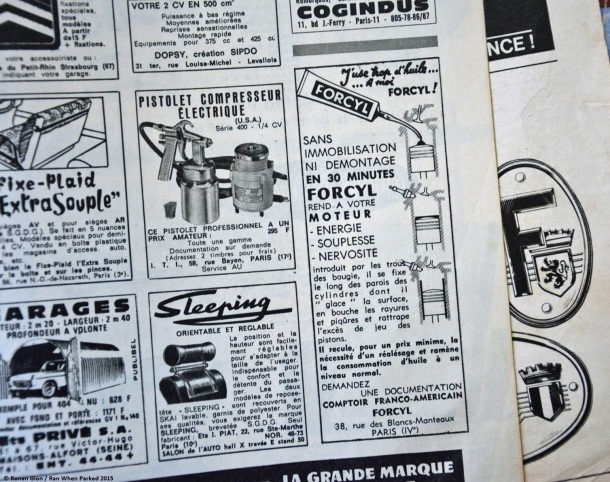 Sacred manufactured bumper overriders that could be installed without taking the bumpers off and without drilling through them. The Peugeot 204 is pictured, but the ad mentions the company’s catalog includes overriders for a long list of both French and foreign cars.

In this ad, Bendix points out that brake boosters are becoming increasingly common because they make driving a lot safer. However, folks who are still driving old cars can easily improve their brakes’ performance by retro-fitting a booster, a process that’s billed as being quick and straight-forward. Bendix’s booster can only be fitted to French cars, including the Panhard PL 17, the Citroën H, the Peugeot J7, Renault’s 4, 6 and 8 as well as a long list of Simcas such as the 1501.

Scram sold a type of supercharger that uses a belt-driven turbine to feed more air into the engine. The ad claims the device stays off at low rpms and it automatically kicks in as soon as the gas pedal is pushed all the way to the floor. It noticeably improves the performance of the Peugeot 404, the Citroën DS and ID and, oddly enough, the Fiat 850, though the company noted that it was working on adapting the system to the Renault 8, the Simca 1000 and the Panhard 24. 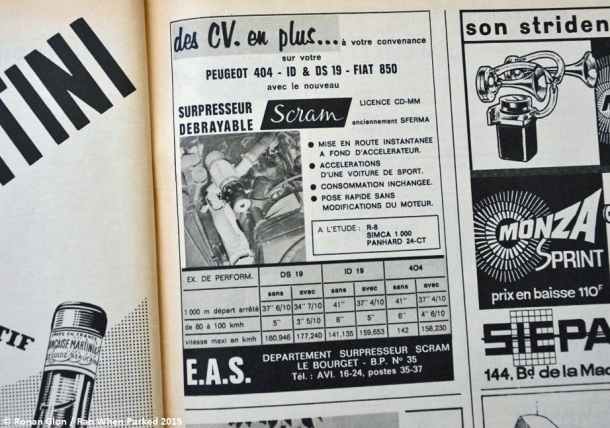 6 thoughts on “Browsing through aftermarket accessories from the 1960s”