In the 1960s, the idea of buying a car with a TV-like screen integrated into the dashboard was almost unthinkable. Now, what if we told a 1960s motorist that the little screen could display a detailed map and provide real-time driving directions? Impossible!

Ford was among the among the automakers that were ahead of the curve, and the Aurora concept that the Blue Oval introduced in 1964 featured a primitive version of the modern-day navigation system referred to in period press documents as a position indicator. Simply put, Ford installed a paper map with crosshairs that automatically adjusted to show the position of the car. The system didn’t give driving directions, but it made it much more difficult for the driver to get lost.

The early navigation system was one of a number of futuristic features packed into the Aurora. Designed to preview the family car of the future, the concept boasted a lane speed panel that provided the speed limit of each lane on the highway – a feature built into many infotainment systems today – and a constant speed control device that was essentially an early form of cruise control.

Not every all of the Aurora’s futuristic features made it to production. For better or worse, the glow-in-the-dark side panels that were designed to improve safety at night remained at the concept stage. And, of course, at the time no one could forecast that the family station wagon of the future would actually be a crossover. 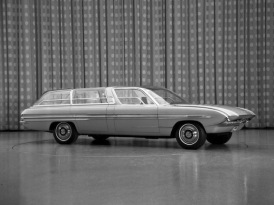