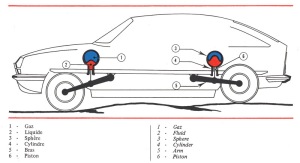 Confirming a recent rumor, Citroën CEO Linda Jackson has announced the automaker has decided to axe its hydraulic suspension system before the end of the decade. This marks the end of an innovative technology that has helped set Citroën apart from its rivals for over half a century.

“Hydraulic suspension will cease because it is an old technology,” explained Jackson in an interview with industry trade journal Automotive News (subscription required). Other sources have hinted the technology is also being phased out in a bid to cut costs.

With the C6 long gone, the only Citroën currently offered with a hydraulic suspension is the C5 but the take-up rate has been low at best and it is steadily declining. Last year, only about 10,000 C5s were ordered with the optional hydraulic suspension, while the rest all featured conventional steel springs.

Designing an evolution of the C5’s hydraulic suspension (which is called Hydractive III+ in Citroën-speak) is overly costly, especially because the setup can’t be easily adapted to other models. Peugeot buyers are after a more responsive ride that doesn’t require hydraulics, while installing a hydraulic suspension in anything smaller than a C5 would make the car prohibitively expensive. Finally, developing a hydraulic system specifically for PSA’s newly-emancipated DS brand has been ruled out for cost reasons.

“[PSA boss] Carlos Tavares has made it clear that there are now other systems that can do just as well. Hydropneumatics cost a lot for not much benefit,” said an inside source in an earlier interview with Automotive News.

Jackson stressed that Citroën will continue to build comfort-focused cars, but the next C5 is expected to use a conventional steel suspension system with electronically-adjustable dampers, a setup similar to what is already available in a long list of German, American and even Italian cars today. Drivers will likely be able to choose from a handful of suspension settings including “comfort,” “sport,” “normal” and “individual” by simply flicking a switch on the center console or finding a menu in the car’s infotainment system.

5 thoughts on “Official: Citroën will axe its hydraulic suspension system by 2020”