Generally speaking, when I find an abandoned car I can tell right off the bat how it got there. The Renault 10 I featured last week was most likely stolen, stripped and hidden decades ago, while the Citroën HY that came before that was undoubtedly parked after being driven into the ground.

The third-gen Ford Fiesta pictured below is a little bit of an enigma. At first glance it looks like a stolen car but it’s right next to a Peugeot 205, it’s out in the open and it’s parked on a popular motocross track. If it was stolen, someone would have likely reported it and the authorities would have towed it away almost immediately. If it was abandoned, again, someone would have reported it and had it scrapped. I’ve seen abandoned cars used as jumps by motocross riders but these two are way too far off the beaten path for that.

Apparently there aren’t very many motocross riders who are interested in Fiesta parts because it’s almost complete, I even grabbed a few lightbulbs from it. The windows have been broken and it looks like the body panels were smashed in with rocks. The windshield was gone and the plates are missing so it’s hard to tell precisely when it was last on the road.

A sticker on the trunk reveals it was sold new in Arles, about an hour and a half away from where I found the car. The timing belt was changed at a little over 31,000 kilometers (roughly 20,000 miles) which indicates it was used only for very short trips. 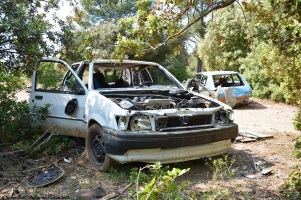