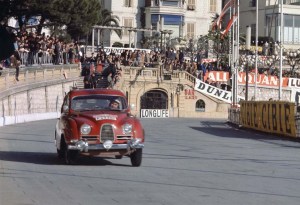 Renown rally driver Erik Carlsson has passed away in a hospital near his home in England at the age of 86 after a short illness. Affectionately nicknamed Mr. Saab, Carlsson is remembered as the man who cemented the Swedish automaker’s spot in the history of rallying.

Carlsson was born on March 5th, 1929, in Trollhättan, Sweden, a stone’s throw away from where Saab’s headquarters were established in 1945. In his late teens, he drove motorcycles until he scraped together enough money to buy a used Saab 92, the company’s first regular-production model. By 1954, Carlsson had purchased a retired 92 race car whose two-stroke engine had been tuned by Saab to pump out 36 horsepower, 11 more than stock.

Carlsson quickly hit the track and developed his own driving style. Because his Saab was relatively underpowered, and because two-stroke engines deliver their maximum output at high rpms, he almost never lifted his foot off the throttle during a race. In fact, he is credited for fine-tuning the left-foot braking technique, which consists of keeping the right foot firmly planted on the gas while occasionally hitting the brake pedal with the left foot.

Although the odds were stacked against him, Carlsson moved up in the rallying world and took first place in the British RAC Rally in 1961, 1962 and 1963, and in both the 1961 and 1962 editions of the Monte-Carlo Rally, beating bigger and more powerful cars like a Citroën ID19 and Mercedes-Benz 220SE. He often rolled his Saab – sometimes on purpose – and he was known as Carlsson on the roof (the name of a Swedish children’s book) during the 1960s.

Carlsson retired from racing in 1970 after a 15-year long career during which he never raced with anything other than a Saab. Naturally, in his later years he became one of the brand’s ambassadors and frequently appeared at shows, historic races and events all over the world. 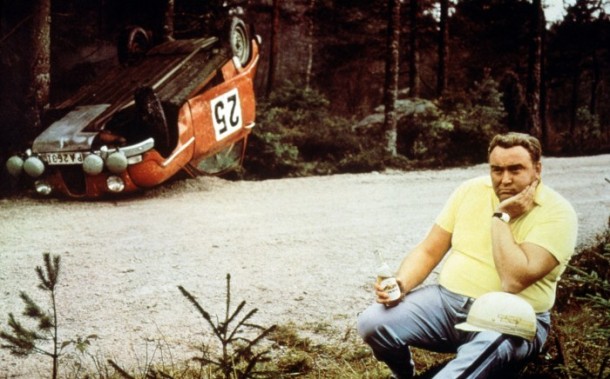 One thought on “Swedish rally legend Erik Carlsson dies at 86”