Two years ago, we published a highly detailed article about the history of the Peugeot 205. We wrapped-up the text in early 2013 but we didn’t publish it until May of that year because we wanted to make sure we had as many photos as possible.

Over the course of a few months, we tracked down a three-door 205 from the first year of production, several limited-edition models, a late-model convertible and so on. The only 205 variant we didn’t manage to find was the Multi, a small van introduced in 1986.

We finally tracked down a 205 Multi a couple of weeks ago in the Ardèche department of France. It was parked in front of a house on the outskirts of a small village next to a first-gen Opel Corsa, a Renault Super 5 and a Renault Estafette. We don’t know how long it’s been sitting there for but it evidently hasn’t moved in a long time and it’s currently being used as a shed.

Introduced in 1986, the Multi looked like a bulky station wagon version of the three-door 205 hatch. It was built by independent coachbuilders like Gruau and Durisotti and sold through Peugeot dealers as an authorized conversion. The Multi was offered with a 50-horsepower 1.1-liter gasoline-burner (later upgraded to 55 ponies) and a 1.8-liter diesel until it was phased out in 1993. By that point, the Multi was overshadowed by the C15-based 205 F, which was a lot more practical.

By most conventional means of measurement the Multi isn’t exactly desirable, but it’s unquestionably one of the rarest variants of the 205 today. Few were sold, and even fewer remain because they were generally driven into the ground. 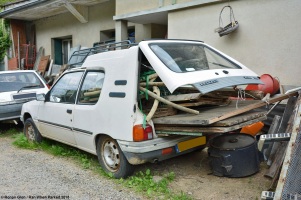