Hongqi, a name that literally translates to red flag, holds a prominent spot in the history of the Chinese auto industry. The very first car ever assembled in China was the 1958 Hongqi CA72, a large sedan that was essentially a re-bodied 1955 Chrysler built to be used as a parade car for heads of states and as a means of transportation for prominent individuals making an official visit to China.

The CA72 was replaced by the CA770 in 1963. Chinese citizens weren’t legally allowed to drive at the time, let alone purchase a car, so only about 1,600 examples of the CA770 were sold to high-ranking party members over the course of the sedan’s production run, which ended in 1980. Subsequent Hongqi models were a lot less prestigious – while the CA770 was essentially a Chinese Rolls, during the 1990s the company sold re-badged versions of the Audi 100, the Toyota Crown and, oddly enough, the Lincoln Continental.

A couple of years ago, Hongqi parent company First Automotive Works (FAW) announced plans to return the automaker to its former glory by introducing several new models including an E-Class-fighting sedan called H7 and a new flagship limousine dubbed L9. Later on, more affordable versions of the limo called L5 and L7, respectively, were also announced.

The L-series stands out as China’s first-ever retro-styled car. Its front end harks back to the CA770 with a pair of round headlights surrounded by chromed bezels, a wide radiator grille with chromed vertical slats, clear rectangular turn signals, round fog lights and a thin strip of chrome trim that mimics the look of the CA770’s metal bumper. A prominent hood ornament shaped like a red flag adds a finishing touch to the design. 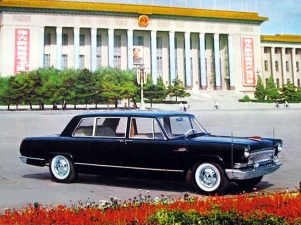 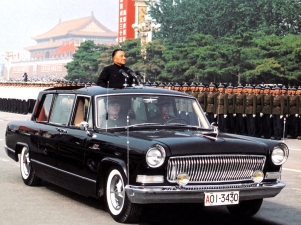 The L5 is equally impressive on paper. Tipping the scale at no less than 6,950 pounds (3,152 kilos), the sedan stretches 216 inches (548 centimeters) long, 78 inches (198 centimeters) wide and 60 inches (152 centimeters) tall, dimensions that make it nearly ten inches longer than an Audi A8 L yet shorter than both the aforementioned L7 and L9. More importantly, it’s about 2,500 pounds (1,133 kilos) heavier than the A8, though in all fairness Audi’s flagship benefits from the extensive use of lightweight materials such as aluminum.

To say that the L5 is a low-volume model is a massive understatement. It’s an overly expensive yacht-sized sedan sold exclusively in China in strictly limited numbers, which means it’s the kind of car that very few people will ever get to see in person. It’s rare enough to demote the Veyron to Hyundai Genesis Coupe status, so you can imagine my excitement when I randomly stumbled upon the Hongqi stand last week at the Shanghai Motor Show and noticed a L5 on display.

The L5 was parked next to a new SUV christened LS5 that looks like the illegitimate child of a Rolls-Royce Phantom and a Jeep Grand Cherokee. Intrigued, I walked up to the stand and showed my press pass to a man in a suit who told me in broken English that I could go up and take pictures only if I agreed to put on a pair of blue slippers over my shoes – that’s odd, I’ve covered auto shows on three continents for the past few years and I’ve never had to worry about getting the carpet dirty. After I put on the slippers, the man examined my pass a second time, opened a short glass door and quietly ushered me towards the sedan. Clearly, not everyone who manages to get into the Shanghai Motor Show during the press days is entitled to sit in a Hongqi – Porsche wasn’t checking passes, neither was Mercedes-Maybach. Anyone masquerading as a journalist was encouraged to slip behind the wheel of a 918 Spyder or a S600 Pullman.

Sitting in the driver’s seat, where I imagine very few Hongqi owners will ever find themselves, my first impression is that the cockpit is an odd mix of modern and retro-inspired components. For example, the two-spoke steering wheel is fitted with a 1960s-style horn ring and wood trim on the cap but the rest of it is simply wrapped in mundane rental car-spec black leather. Would it have cost that much more to fit it with a wooden rim?

The dashboard is refreshingly simple and uncluttered, it’s nice to see that the retro design extends beyond the sheetmetal, but it’s also incredibly basic for such a high-end car. The traditional instrument cluster has been replaced by a screen in the middle of the dashboard, and driver – sorry, the chauffeur – can navigate the infotainment system by using a touch screen discreetly located at the bottom of the center console. The materials used are average at best and the build quality defines the word haphazard. It’s not exactly appalling but nothing feels top-notch, the cockpit gives off the same faux-premium feel you’d find in a 1990s Lincoln. The seats, the center console, the dashboard and the door panels are all upholstered in a Mao-approved shade of red.

The L5 was unabashedly designed to coddle the rear passengers so the sedan offers acres of leg room. Really, you could open a bar and an arcade back there – my dorm room in college wasn’t this big. Large screens integrated into the front headrests provide on-the-go entertainment, while aircraft-style tables built into the front seats let occupants get work done even if they get stuck in China’s notoriously long traffic jams.

Hongqi tells me that the L5 is powered by an all-aluminum 6.0-liter V12 engine that makes 402 horsepower at 5,600 rpm and 504 lb-ft. of torque at 4,000 rpm. Linked to a six-speed automatic transmission, the 12-cylinder sends the sedan to a top speed of 124 mph (200 km/h). I couldn’t gather additional technical details during the show because the company didn’t give me a press kit – cars like the L5 sell themselves so I suspect that Hongqi has zero interest in winning over foreign auto journos with fancy USB flash drives shaped like a modern art sculpture.

You’re forgiven if you’re thinking that, for someone who lives in China, the L5 makes a pretty decent alternative to the BMW 7 Series or the Mercedes-Benz S-Class. It’s not as luxurious, it’s not as well built and it doesn’t boast the same amount of high-tech features, granted, but it’s undeniably one of the more unique cars on the market, it’s got a powerful engine and its design is well executed.

Now, grok this: the first regular-production L5 was purchased by the owner of a furniture-making company on the sidelines of last year’s Beijing Motor Show for five million yuan, an astronomical sum that converts to roughly $805,000. That figure makes the limousine the most expensive Chinese car ever built by a long shot – even high-end European stuff built in China doesn’t come anywhere close. For $800,000 you could buy a Rolls-Royce Phantom, a Porsche 911 Targa and still have nearly a quarter of a million dollars to play with.

Hongqi hasn’t revealed how many L5s it has sold since last year’s Beijing show but I imagine the number is pretty low and I’d say the sedan’s future is darker than its paint job. Still, there’s something strangely fascinating about it, it’s the kind of car I’ll tell my grandkids about in 50 years. I like the design and the overall boldness of it, so much so that I couldn’t resist placing an order.. for a 1/84-scale Tomica-built L-Series. 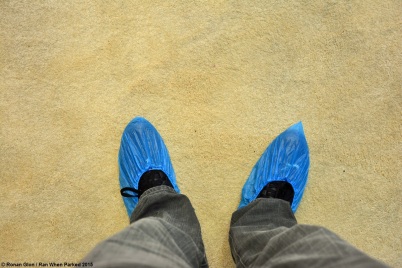 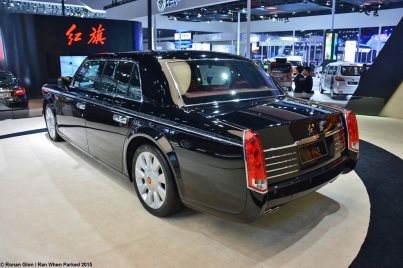 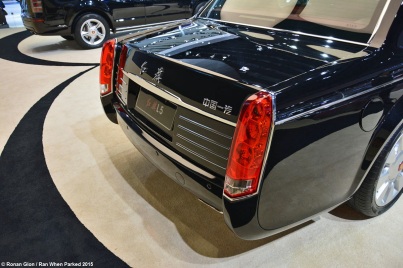 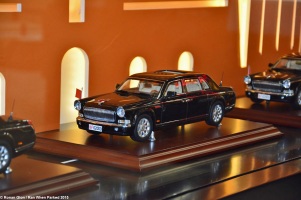 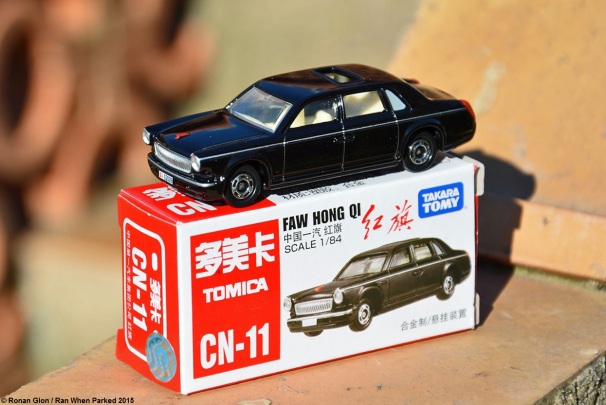 2 thoughts on “Live from the Shanghai Motor Show: The Hongqi L5, China’s only retro-styled sedan”