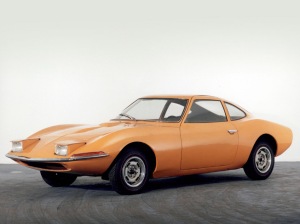 It’s a busy time in the auto industry: the Chicago Motor Show opens its doors to the press today and the Geneva Motor Show is right around the corner. Chicago has become a relatively small show, but many automakers will travel to Switzerland to introduce close-to-production concepts that accurately preview upcoming models. Today, we take this for granted but in the 1960s concepts were generally design studies that were not intended for mass production.

Opel traveled to the 1965 edition of the Frankfurt Motor Show to introduce a concept dubbed Experimental GT, a sleek two-seater that surprised both the press and the public when it was unveiled. As its name loosely implies, the Experimental GT was designed to show what an affordable, small and relatively fuel-efficient sports car could look like. In short, it was an American muscle car built to European tastes.

The GT was introduced as merely a design study but it raised eyebrows nonetheless because it stood out from anything Opel had built in the past, be it a concept or a production car. Erhard Schnell, Opel’s chief of design for decades, explained that the company’s cars were almost all penned in Detroit by General Motors designers until 1962, when the Germany-based automaker opened its own design studio. From that point on, Opel designers were free to draw their own cars from start to finish.

Schnell was asked to start developing a coupe in the early 1960s. Speaking in a promotional video published by Opel a few years ago, he remembers that he was excited to start working on the project because Opel had never built a true sports car, it was a first for almost everyone involved. Notably, Schnell explains that the GT was hidden from General Motors’ top brass for a few weeks because the team was scared that management would cancel the project if they found out about it.

Visually, the Experimental GT featured a sporty-looking and aerodynamic body. Critics immediately pointed out that the GT borrowed design cues such as its pop-up headlights and its pronounced front fenders from the second-generation Chevrolet Corvette but Schnell argues that the bulk of the inspiration came from Italian sports cars.

Inside, the Experimental GT featured a simple, function-over-form cockpit characterized by half a dozen round analog gauges spread out on the dash, a totally bare center console and a three-spoke steering wheel. Designers had to use as many components from the Opel parts bin as possible in order to cut costs so the GT was powered by a modified 1.9-liter four-cylinder borrowed from the Rekord B that was introduced that same year. A carefully-selected group of journalists was invited to Opel’s Dudenhofen, Germany, test track to put the GT through its paces shortly after it was introduced.

The Experimental GT generated an overwhelmingly positive reaction from the public, the press and – surprisingly – GM executives when it was unveiled in Frankfurt. Tellingly, Schnell remembers that no one had anything negative to say about the car. Opel quickly gave the GT the green light for production and assigned a small team to work on the project.

Called simply GT, the production version of the Experimental GT was introduced in September of 1968, earning it the distinction of being the first European car previewed by a close-to-production concept. The GT featured a number of visual updates including more streamlined headlights and bigger turn signals but the overall silhouette made the jump from the auto show floor to the showroom with only small modifications.