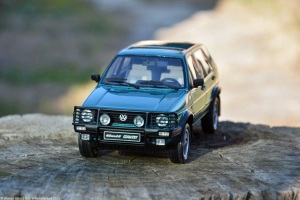 French model manufacturer Ottomobile recently released a 1/18-scale Volkswagen Golf Country. Like all of Ottomobile’s cars, the Golf Country is a limited-edition model that is sold exclusively on the company’s website on a first-come, first-served basis.

The Country isn’t Otto’s first 1/18-scale second-gen Golf so it’s not surprising that the proportions and the details are above average. Notably, the shape of the tail lamps is more realistic on the Country than it is on Norev’s 1/18-scale GTI, which you can see in some of the photos below. The ground clearance is spot on and small bits and pieces like the door locks, the Volkswagen emblems on the mudflaps and the tow hooks are all accounted for.

The model is crafted out of resin so there are no opening parts but the interior is highly detailed. The instrument cluster is skillfully reproduced and even the gear pattern is printed on the shift knob.

The biggest issue with Otto’s Golf Country is its shoddy build quality, a problem that we unfortunately point out every time we showcase one of the company’s models. The amount of glue residue around the windows is borderline unacceptable and the four wheels never touch the ground at the same time. Additionally, our car arrived with a broken rear wiper but Otto promised to send us a new one as soon as possible.

Overall, we give the Country a six out of ten. We’re glad that Otto chose to make a 1/18-scale replica of the Golf Country, it’s admittedly a little bit of an off-beat choice, and the details are impeccable inside and out but the overall quality needs to improve significantly. 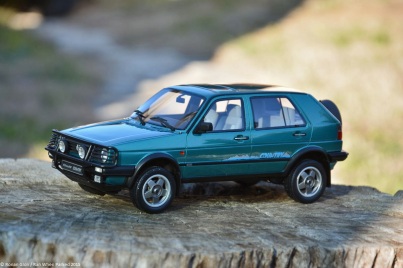 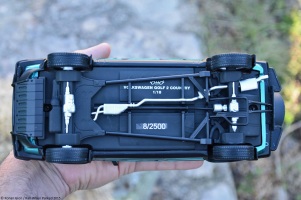 One thought on “Scaled down: Ottomobile’s 1/18-scale Volkswagen Golf Country”