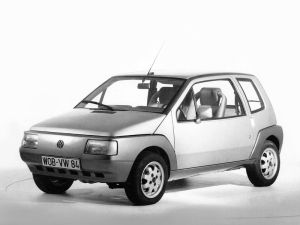 Volkswagen toyed around with the idea of an entry-level model for decades before it finally committed to the project. Called EA-48, the first prototype marked a milestone in the company’s history when it was built in 1955 because it was the first Volkswagen designed in-house without any input from the Porsche family. In many ways, the EA-48 previewed the modern supermini as we know it: it was equipped with a McPherson-type front suspension, some prototypes had a hatchback and engineers even considered developing a two-cylinder diesel engine for it. Volkswagen head Heinz Nordhoff canceled the EA-48 project because he was afraid that it would steal sales away from the Beetle.

Over the course of the 1960s, the Beetle and its derivatives were so popular in Europe and in the United States that Volkswagen saw little use for an entry-level model and the idea largely remained on the back burner. However, the oil crisis that rocked the world in 1973 put the project back on the table and designers came up with a new concept called Chicco two years later. Designed to slot beneath the first-gen Polo, the Chicco was an internal design study that wasn’t shown to the public until many decades after its completion.

Volkswagen’s third major entry-level project was the Student concept that was unveiled in 1982. Developed to slot under the then-new second-gen Polo, the Student broke all ties with other members of the Volkswagen lineup with a futuristic design characterized by a grille-less front end that was later adopted by the third-gen Passat, plastic bumpers that wrapped around the wheel arches – a design cue famously found on the first-gen Ford Ka – and a glass tailgate similar to the one that equips the Toyota Aygo / Citroën C1 / Peugeot 108 triplets.

Inside, new front seats were developed to free up as much space as possible for the rear passengers, allowing the Student to carry up to four adults on short trips. Alternatively, the rear seat backs could be folded flat individually when extra cargo space was needed. Instrumentation was kept to a minimum in order to cut costs and weight and the Student featured a minimalist, function-over-form dashboard with a unusually narrow center console and even a small glovebox.

The Student was designed to be powered by one of two engines. The first was a Polo-sourced 1.1-liter four-cylinder unit that made 50 horsepower, enough to send the Student from zero to 62 mph (100 km/h) in about 14 seconds and on to a top speed of 98 mph. Mounted transversally, the four spun the front wheels via four-speed manual transmission. The second engine was a larger 72-horsepower unit that lowered the zero-to-62 time to 10 seconds and raised the top speed to 111 mph.

Like its predecessors, the Student remained a prototype that never got to see the light that awaits at the end of a production line. However, Volkswagen finally introduced a sub-Polo model when it launched the Lupo in 1998, and the up! that is currently on-sale in Europe is a direct descendant of the Student.

2 thoughts on “A look at the 1981 Volkswagen Student concept”