Nissan went all out at the 1987 edition of the Tokyo Motor Show, displaying no less than six concepts ranging from a mid-engined Toyota MR2-like sports car to a tall Renault Espace-fighting minivan christened Jura, a name borrowed from a mountain range in Europe. One concept that largely flew under the radar was the Judo, a tall two-seater that almost looked like a Porsche 914 dropped on a Jeep Wrangler chassis.

The Judo stretched 157 inches (399 centimeters) long, 66 inches wide (169 centimeters) and 62 inches tall (158 centimeters), dimensions that made it about as long and as wide as a second-generation Golf but a couple of inches taller. It featured a rugged design accented by body-colored bumpers on both ends, a pair of large fog lamps up front, a winch hidden in the rear bumper and a full-size spare tired integrated into the rear fascia. The entire top was designed to slide backwards by a few inches, providing a futuristic take on the tried-and-true T-top roof. Finally, six-lug alloy wheels wrapped by aggressive Bridgestone tires let the world know the Judo meant business.

The Judo featured a simple, uncluttered design that grouped all of the buttons and knobs on the center console, leaving the instrument panel completely bare save for two rectangular air vents. The steering was commanded through a three-spoke wheel, and the instrument cluster was made up of a handful of analog gauges. The interior provided space for two passengers, but a cramped rear bench could be used to transport two more on short trips.

Power came from a turbocharged 2.0-liter four-cylinder engine that made 210 horsepower at 6,800 rpm and 195 lb-ft. of torque at 3,600 rpm, figures that were downright impressive for such a small car in the late 1980s. Also used in Nissan’s Cedric and Gloria sedans, the turbo four spun the four wheels via a five-speed manual transmission and Nissan’s Advanced Total Traction Engineering System for All-Terrain (ATTESA) all-wheel drive system.

It goes without saying that the Judo was not given the green light for production and it remained a one-off concept. However, the Suzuki X-90 that was introduced in 1995 was noticeably inspired by the Judo. 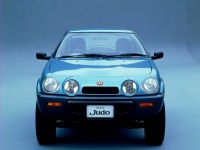