Service vehicles used by car dealerships don’t have it easy. Their daily duties consist of running endless errands, towing, hauling and often being driven by dozens of different drivers who don’t always treat them very well. They are generally kept until they are worn beyond belief and either scrapped or repainted and sold.

With this in mind, we were beyond surprised to see an ex-dealer Renault 4 F4 parked in a small town located about an hour west of Paris. All of the period graphics are still there, including the name and address of the dealer written on both doors, but the orange siren on the roof is missing. A quick look on Google Maps reveals the dealer is still in business today.

The registration number was issued in 1985 and we’re fairly certain it is original to the car. There are several features that tell us it’s a later model including a beige radiator grille, metal protection tubes up front and an exhaust system that exits out the back rather than on the driver’s side. The reverse light in the rear door is not original but it appears to be from a post-1990 R4 hatchback.

Rust has chewed through the passenger-side fender, a common issue on 4s, but overall the F4 is pretty well preserved considering it’s about to celebrate its 30th birthday. 4 hatchbacks are still a common sight in France but the vans are a little harder to find, and this is – if memory serves – the first ex-dealer van we’ve seen in the past five or six years. 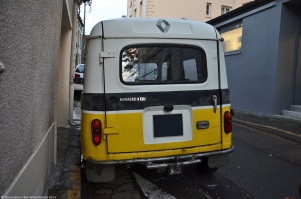 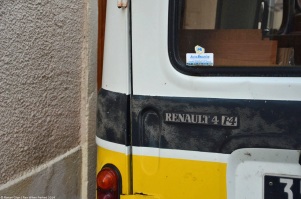