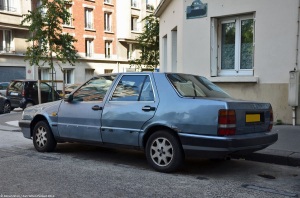 The Lancia Thema was presented to the public for the first time at the 1984 edition of the Turin Motor Show. Designed to slot at the very top of the Lancia lineup, it rode on a new platform called tipo quattro (Italian for “type four”) that it shared with the Alfa Romeo 164, the Fiat Croma and the Saab 9000.

Officially, the Thema was aimed at large and luxurious German sedans like the Audi 100, the BMW 5-Series and, later, the Mercedes-Benz w124. It was popular in Italy, as expected, but it largely failed to gain traction elsewhere in Europe because the built quality wasn’t always up to par and Lancia’s image was already on the decline.

The entry-level models were initially powered by a rather crude carbureted 1.6-liter four-cylinder engine that made just 105 horsepower. However, buyers willing to shell out a little more cash could get a 2.0-liter turbo four that made 166 horsepower, a 2.8-liter PRV V6 or a 2.5-liter turbodiesel. Most models came standard with a five-speed manual transmission and select engines could be paired with a four-speed automatic at an extra cost.

Lancia took the automotive world by surprise in 1986 when it introduced a range-topping variant of the Thema powered by a Ferrari-sourced 2.9-liter V8 engine. The lineup was further expanded with the addition of a roomy Pininfarina-designed station wagon, and the Thema went through several visual and mechanical updates over the course of its production run.

The Lancia Thema was phased out in 1994 after over 350,000 examples were built. Unsurprisingly, the handful of Ferrari-powered 8.32 models are already classics and highly sought-after by enthusiasts. Will standard Themas follow suit, or will values remain low? 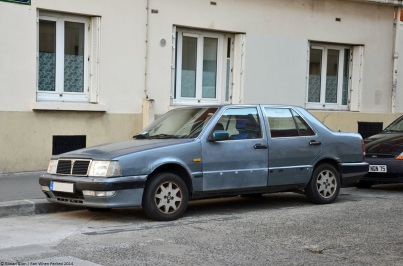 4 thoughts on “Is the Lancia Thema a future classic?”