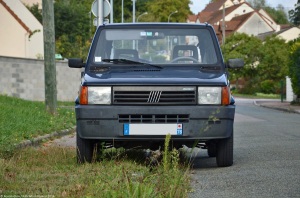 We recently got to spend an afternoon behind the wheel of a 1996 Fiat Panda owned by a relative. The Panda is newer than the cars we typically feature on Ran When Parked but we quickly decided it was worth showcasing nonetheless.

First, the Panda was introduced in 1980 so the early models are nearly 35-years old. Second, the Panda is showing early signs of becoming a cult classic. It finished in the top five in our first “future classics” contest and the early models with the metal radiator grille are starting to become sought-after by Fiat enthusiast. We predict the later, facelifted examples like the one pictured below will follow suit, although it might take a little longer because they are admittedly a lot more common. Similarly, expect clean 4×4 models to quickly go up in value over the coming years.

The Panda was openly inspired by both the Citroën 2CV and the Renault 4. It’s a marvel of simplicity inside, outside and under the hood. Like the 2CV and the 4 it stayed in production for a very long time – probably much longer than initially intended – and with only minor modifications. And, like the 2CV and the 4, the Panda remained a hot seller even after it became outdated because it was one of the most affordable cars available new in Europe.

Although it’s relatively Spartan inside, the Panda doesn’t feel cheap. This trait has been lost over time and today simple is often a synonym for cut-rate – take a look at the last-gen Toyota Aygo / Peugeot 107 / Citroën C1, for example. The triplets all had roughly the same interior, it was bare-bones but it was terribly screwed together and it is aging very poorly. By contrast, the Panda still feels solid and well-built after nearly 20 years, though there is nothing superfluous to it and the instrumentation has been reduced to just the bare minimum.

The Panda is roomy considering its small footprint and two adults can ride up front without feeling crowded. The story is different in the back, where the reduced dimensions become painfully obvious. There are generously-sized storage bins in the doors, and Fiat replaced the glovebox with large tray. The setup is practical until you need to leave valuables in the car.

Our particular Panda is powered by a proven 1.0-liter Fully Integrated Robotized Engine (FIRE) engine that was found under the hood of many Fiat products in the 1980s and 1990s including the Uno and the Lancia / Autobianchi Y10. In the Panda, the four makes 45 horsepower at 5,250 rpms and 55 lb-ft. of torque at 3,250 rpms. Power is sent to the 13-inch front wheels via a five-speed manual transmission.

The Panda is by no means fast, but it’s quick enough to keep up with modern traffic in most circumstances thanks in part to a low weight of 1,543 pounds (700 kilos). Zero to 62 mph (100 km/h) takes about 16 seconds, which sounds like a lot but it’s actually a fairly reasonable statistic considering the type of car we’re dealing and the era it was built in. The only situation where the Panda really lacks pep is when going up a long, steep hill.

Fuel economy is admittedly not one of the Panda’s strongest attributes, and those who drive a lot will need to fill up often because the tank is pretty small. All Pandas were fuel-injected starting in 1993 so they can burn European-spec 95-octane fuel.

The early Panda was often called out by the public and the press for its archaic leaf springs, and Fiat responded to the criticism by fitting all two-wheel drive models with an independent rear suspension setup in 1986. The Panda’s ride is again reminiscent of the 2CV and the 4 in the sense that it offers a copious amount of body roll but it never feels dangerous, you don’t get the impression that you’re going to go belly-up if you take a turn too fast. Sporty it ain’t but the ride is comfortable and it’s also remarkably smooth over rough, dirt roads.

The Fiat Panda is cheap to run, it’s easy to work on, parts are readily available throughout most of Europe and it’s roomy provided you don’t regularly travel with three adults on board. In spirit, the boxy, Giugiaro-designed Panda is a true heir to the Citroën 2CV and the Renault 4. 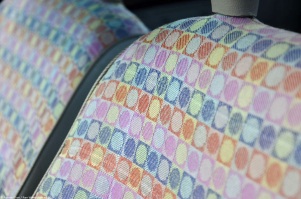