BMW is celebrating the 20th anniversary of its Spartanburg, South Carolina, factory. The first American-built BMW was a white four-door 318i (E36) that rolled off the assembly line on September 8th, 1994. Symbolically, it wore a front license plate that read “proud to call South Carolina home.”

BMW began to consider building a factory abroad in the late-1980s. A report published by the University of South Carolina finds BMW chose to set up shop in South Carolina after visiting nearly 250 potential sites scattered all around the world. The announcement marked a historical milestone for the Munich-based automaker because it had never operated a full-fledged factory outside of Germany. True, BMWs were built in places like Rosslyn, South Africa, but up until the mid-1990s the cars were shipped as complete knock-down (CKD) kits and merely assembled locally.

South Carolina wasn’t chosen at random. The strong Deutsche Mark caused BMW sales to plummet in the United States, the world’s most lucrative car market in the 1980s and 1990s. The aforementioned University of South Carolina report finds BMW sold 100,000 cars in the U.S. in 1986, but sales had dropped to roughly 53,000 in 1991.

Understandably, South Carolina prepared a large incentive package for BMW that included a 1,039-acre plot of farmland strategically located near an international airport, a host of tax breaks, help with setting up the required infrastucture and even assistance with training employees. In return, BMW made a sizable investment that brought thousands of jobs to South Carolina at a time when it needed it most. It was a win-win situation for the two parties.

Spartanburg started by churning out the 318i and the 318is for the local market. It took on production of the 318i Compact soon after, and it reached its cruising speed when production of the Z3 kicked off in September of 1995. South Carolina-built Z3s were sold all around the world, including in Germany.

Over the past two decades Spartanburg has gradually turned into one of BMW’s largest and most important assembly plants. Last year, about 70 percent of the nearly 300,000 vehicles it manufactured were shipped overseas, and the company has built nearly 2.5 million cars in South Carolina to date. The factory is set to get even bigger as BMW has confirmed plans to raise capacity by 50 percent in 2016, bumping the plant’s output to 450,000. In addition to the X3, the X5 and the X6, the plant will build the new X4 and an upcoming range-topping SUV tentatively called X7. 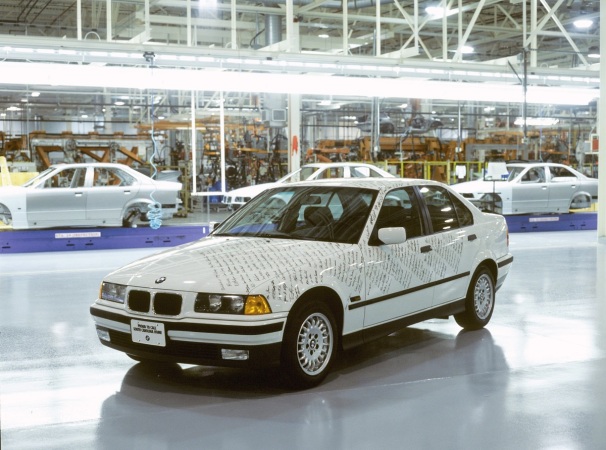 One thought on “20 years ago: BMW builds first car in the United States”