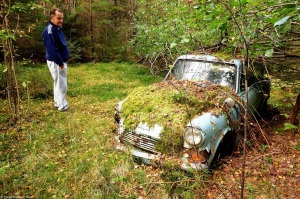 Every time we find an abandoned car, we can’t help but wonder what the person who bought it new would think if he or she could see it today. After all, we assume that every car out there was once someone’s pride and joy, at least on the day that it was driven off the lot for the very first time.

A fascinating story from Finland gives us a little insight on what it’s like to find an abandoned car you once owned – or, in this case, still own. 40 years ago, a Finnish man parked his first car, a light blue 1967 Ford Anglia, next to a field behind the house that he was born in because the engine block had cracked. The Anglia had other minor issues like a leaking radiator so the owner decided not to change the block and figured he would deal with the car later.

Accompanied by his son, the man recently trekked out to where he parked the Anglia and he was a little surprised to find out that it is still sitting in the same spot. It is in a remote area of Finland called Southern Savonia which explains why it hasn’t been removed, vandalized, burned or stripped, though the right front fender has been badly dented. A sticker still visible on the rear window indicates the car was sold used at a British Leyland dealer in Mikkeli, one of the bigger towns in the region.

The Anglia is covered by a thick layer of moss and it has started to sink into the damp ground, so towing it out and restoring it to its former glory is likely easier said than done.

All photos were kindly provided by Tommi Nummelin and used with permission.