Storied design house Bertone was declared bankrupt by an Italian court earlier this month after failing to attract investors. The announcement does not come as a surprise because the company has been struggling to stay afloat for the past couple of years.

Reports circulating around the Italian auto industry indicate Bertone has racked up a €31 million (approximately $42 million) debt in roughly five years. The court in charge of Bertone’s bankruptcy case explained it is hoping to sell off what’s left of the design firm before the end of the year in order to pay off creditors, but a price figure was not provided.

One of Bertone’s largest assets is a sizable collection of cars that it has designed and/or built over its 102-year long history. The collection is classified as part of Italy’s heritage by the country’s Ministry of Culture so it can only be sold in one piece and it has to remain within Italy, complicating the task of finding a buyer for it.

As a reminder, the bankruptcy filing only concerns Bertone’s design arm. The company sold its production arm to Fiat and the Italian government in 2011 as a last-resort deal to generate cash flow and the Grugliasco, Italy, plant now builds the Maserati’s Quattroporte and Ghibli sedan. 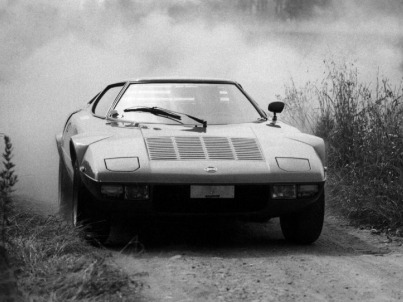