A white piece of metal caught our eye in the woods while we were driving across the lower Alps last winter. We immediately turned around, parked and made our way across the forest as best we could. A couple of minutes later we found ourselves face-to-face with a Talbot VF1 hidden behind literally hundreds of trees.

We know it’s a Talbot and not a Simca because the registration number indicates it was built in 1980. The windshield is gone so we can’t tell when it was last on the road, but if the trees that surround it are any indication it has been parked in the same spot for at approximately 15 – 20 years.

The Talbot is roughly complete, leading us to believe it was parked as a complete car, likely as a result of a mechanical failure. Over times several parts have been removed including a couple of switches on the dashboard, the steering wheel and a few pieces of trim but a quick look under the hood revealed the drivetrain is complete. 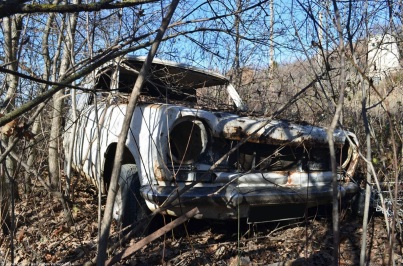 One thought on “Rust in peace: Talbot VF1”