Renault is celebrating the 30th birthday of the Espace, a model often hailed as Europe’s first modern minivan. The Espace joined the Renault lineup only after Matra failed to convince long-time industrial partner PSA Peugeot-Citroën to build the van in the early 1980s.

The Espace traces its roots back to a project launched by Matra CEO Philippe Guédon in the late 1970s.  Reportedly inspired by the conversion vans that were popular in the United States, Guédon wanted to build a successor to the Simca VF2-based Matra Rancho that was capable of carrying a full family and their gear in a living room-like atmosphere.  Matra designer Antonis Volanis heard Guédon’s idea and drafted a quick sketch that depicted a van with an angular silhouette, a high roof and an innovative cab-forward design.  The sketch became known as the “Dessin Orange” (Orange Drawing).

Matra eventually turned the Dessin Orange into a life-size prototype that it presented to Peugeot executives.  Christened P17, the prototype was essentially a tall van designed to carry people but Matra explained it could easily be converted into a cargo-carrying panel van and even a pickup truck thanks to its flat loading floor.  Guédon was all but certain Peugeot would adopt the design so he asked his engineers to build the P17 using numerous parts from the PSA bin including a modified Talbot Solara platform, 604-sourced headlights and door handles borrowed from the 505.  An updated version of the prototype called P18 even used alloy wheels lifted from the Matra Murena.

Peugeot was initially intrigued by the project and it asked Matra if the P17/P18 could be modified to spawn a long-wheelbase model and a more compact version that would be at home in crowded urban areas.  Matra started working on Peugeot’s request but the latter’s management unexpectedly canceled the project because it feared the van would be a flop.

Desperate to replace the aging Rancho, Matra tried to sell the van to Citroën in 1981 by building a new prototype called P20 that borrowed its platform from the then-upcoming BX.  The van looked like an over-grown Visa and it was quickly turned down by Citroën management because it was too expensive to build.

Matra had spent years and a small fortune trying to bring its minivan to production so it tried selling the car to Renault as a last resort before calling it quits.  Matra couldn’t convince Renault to build a model that used PSA parts so the van was once again rebuilt on a Renault 18 platform and dubbed P23.  Guédon showed the P23 to Renault CEO Bernard Hanon and two other executives in 1982, and Renault surprisingly agreed to move forward with the project. Hanon had spent a considerable amount of time in the United States and he was also thinking of developing a small van, though the automaker was not actively developing one when it was approached by Matra.

Renault a Matra signed an agreement in June of 1983 that called for the joint development and assembly of the new model; Matra woas tasked with building the steel body and the polyester body panels in its Romorantin, France, factory while Renault would provide the drivetrain and all other mechanical components.

The Espace (a word that literally means “space” in French) was introduced in early 1984 and the first examples landed in showrooms in June of that year.  The van was initially powered by a 2.0-liter four-cylinder gas-burning engine that sent 110 horsepower to the front wheels via a five-speed manual transmission.  Base models were dubbed Espace 2000 GTS, while upmarket variants adopted the 2000 TSE moniker.  The TSE model came well-equipped with a roof rack, alloy wheels, electric mirrors and remote locks, but its price tag was roughly on par with that of the range-topping Renault 25.

The Espace’s main selling point was its interior.  It boasted a completely flat floor, a roomy cabin that could accommodate up to seven passengers, a futuristic dashboard and separate front seats that could swivel around to create the living-room like atmosphere Matra had imagined in the late 1970s. Alternatively, it was possible to remove the second and third row of seats in order to free up a cavernous cargo compartment.

Espace sales were initially slow and only nine cars were sold in July of 1984, the van’s first full month on the market.  Boosted by rave reviews from the press, the Espace’s career quickly took off and it had become a common sight on European roads by the time 1984 drew to a close.

Renault regularly updated the Espace lineup over the course of the 1980s. A 2.1-liter diesel-burning four-cylinder (available with a turbocharger at an extra cost) and a fuel-injected 2.2-liter four-cylinder joined the lineup shortly after the Espace made its debut.  The van was given a noticeable facelift in January of 1988 that also brought reworked engines and a four-wheel drive system dubbed Quadra.  Finally, one of the mk1 Espace’s final evolutions was the addition of an optional self-leveling rear suspension in the early 1990s.

191,674 examples of the Espace were built by the time production ended in 1991.  At its peak, the Espace was so popular that Matra’s Romorantin plant couldn’t keep up with demand so production also took place in the Alpine factory in Dieppe, France.

Renault toyed around with the idea of selling the Espace in the United States in the middle of the 1980s, and it even built several U.S.-spec prototypes. The project was canned in the wake of slow sales and the poor image of the AMC-built Encore and Alliance. 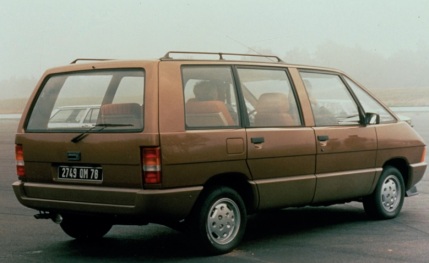 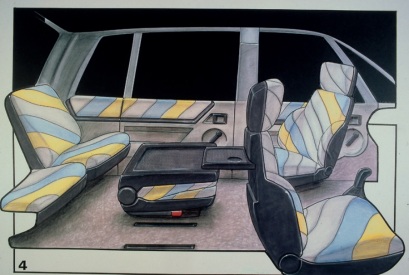 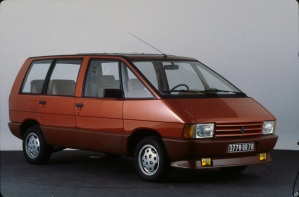 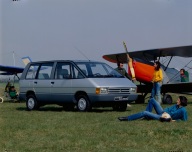 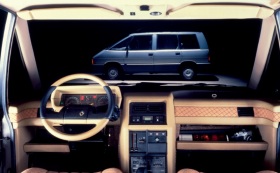 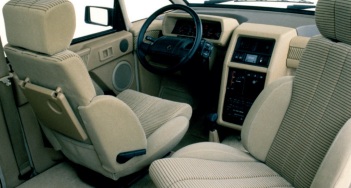 3 thoughts on “30 years ago: Renault introduces the Espace”