Fiat launched the Barchetta in January of 1995 as a part of a two-pronged approach to revamping its image by building affordable sports cars. The Chris Bangle-designed Fiat Coupé was billed as a heir to the sporty Fiat coupes of the 1960s and 1970s, and the Barchetta paid an unmistakable homage to the 124 Spider that was phased out in 1985.

Based on a shortened Punto platform, the Barchetta was designed to fight head-to-head against the Mazda MX-5 Miata. It was introduced with a 16-valve 1.8-liter four-cylinder engine that sent 130 horsepower and 120 lb-ft. of torque to the front wheels via a five-speed manual transmission. The Barchetta took 8.8 seconds to reach 62 mph (100 km/h) from a stop and it went on to a top speed of 124 mph (200 km/h), respectable statistics for the era and the segment.

The Barchetta was relatively popular on mainland Europe but most critics agreed it lacked a hint of brio in order to become a serious MX-5 competitor. Fiat claimed converting the roadster to right-hand drive was too costly of an endeavor so very few were sold in the United Kingdom and in Ireland.

Barchetta production ended in June of 2005 after a little less than 58,000 units were built. The Barchetta died without a heir, though in an odd twist of automotive fate rumors indicate Fiat will get its own version of the next MX-5 that is scheduled to come out next year.

A look in the local classifieds shows an early Barchetta can be had for as little as €3,000. Will the Barchetta go back up in value, or will prices stay low? 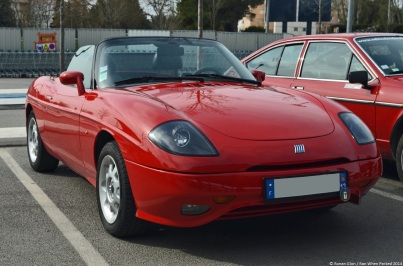 One thought on “Is the Fiat Barchetta a future classic?”