We unexpectedly found this late-1970s Renault 14 TL in a local junkyard while looking Citroën Saxo parts. We were surprised to see it in the yard because 14s are few and far between and, believe it or not, it actually looked fairly clean from 200 yards away.

We suspected something was seriously awry when the owner of the junkyard smiled and said “go take a look at the 14 for yourself.” Closer inspection reveals the car is rough but complete from the tip of the front bumper to the C-pillar, but the rear end has been cut off with an angle grinder in order to turn the family-friendly hatchback into a makeshift pickup.

The owner of the junkyard told us the 14 lost its read end in the early 2000s when the last owner needed a small van or a pickup to haul wood and other debris around his presumably large plot of land. The 14 was hard to sell because it was just about worthless at the time so chopping it up seemed the ideal way to kill two birds with one stone.

The car’s history before it was cut up is not known. Keen observers will note that it is equipped with velour-upholstered petal seats that were likely pulled out of a 14 TS, but whether they fitted before or after the car was taken off the road is up in the air.

There is precious little left to grab on this 14. The body and interior are both shot and the engine is full of water because it sat without a carburetor for months. 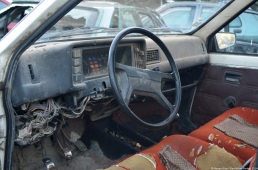