We photographed the 1977 Datsun 210 pictured below at the far end of a self-service junkyard in northern Utah. Time has not been kind to the 210, leaving it dented, unspeakably rusty and partially dismantled.

The 210 was sold new at Cache Valley Datsun in Logan, Utah, and later ended up in the hands of a generic used car dealership called Dell’s Auto sales in the city of Ogden. Both dealerships are gone today.

There are no registration stickers anywhere on the car but a parking pass affixed to the rear window reveals it was driven to a local high school by a student up until 1983. What happened to the car afterwards is a mystery but judging from the condition its in we’re guessing it has been off the road for at least a decade.

All emblems were removed and most of the plastic studs that hold them on were broken, indicating they were likely nabbed by either a collector or someone looking to keep a souvenir from the car. The top of the dashboard looks like a geological formation that has been eroded by water for centuries and there are fist-sized rust rust holes in the doors, testaments of the hot summers and cold winters the car has endured. The torn original seats were hidden by cheap covers at one point in the car’s life.

The engine has been decapitated and the head is in pieces inside the car. Although pure speculation, the 210 could have been taken off the road following a valvetrain issue. 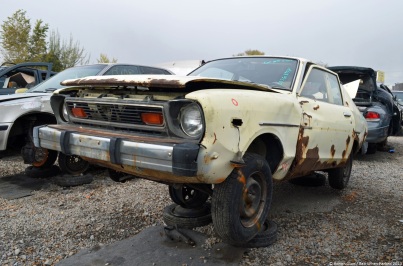