Mitsubishi is displaying a 1974 Lancer 1600GSR at the 84th edition of the Geneva Motor Show. Showcased next to a rally-going Outlander, the Lancer rose to international fame when it won the challenging Safari Rally in 1974 and 1976.

The car was prepared by Kenya-based Joginder Motors and driven by Singh Joginder and David Doig. Power comes from a 1.6-liter four-cylinder engine tuned to make 160 horsepower, making the 1600GSR considerably more powerful than a Galant GTO on which it is based. Power is sent to the drive wheels via a five-speed manual transmission.

The Lancer is much closer to stock than today’s race cars but a slightly raised ground clearance, all-terrain tires and three large fog lights helped it get over Africa’s rough terrain with ease. 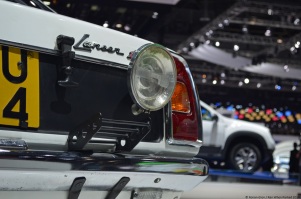