Mazda is displaying a like-new 1989 MX-5 Miata at this year’s edition of the Geneva Motor Show to celebrate the roadster’s 25th anniversary. The specially-outfitted roadster is painted in an attractive shade of green reminiscent of British Racing Green and the interior features tan leather upholstery as well as a wooden Nardi steering wheel. Rally-inspired alloy wheels wrap up the 1970s racer look.

A 1.6-liter four-cylinder engine that generates 116 horsepower and 110 lb-ft. of torque is mounted in the MX-5’s engine bay. Power is transferred to the rear wheels via a five-speed manual transmission controlled via a short-throw shifter with a wooden gear knob.

Mazda’s big debut this year is a new concept called Hazumi and it has no MX-5-related news to announce in Geneva, but an all-new model developed jointly with Alfa Romeo is expected to bow at next year’s edition of the Chicago Motor Show. 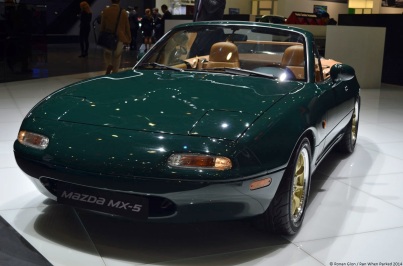 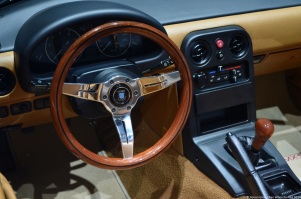 One thought on “Live from the Geneva Motor Show: 1989 Mazda MX-5 Miata”