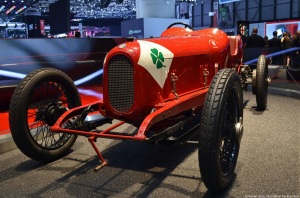 Alfa Romeo is showcasing a 1923 RL at the Geneva Motor Show.  The RL is the first car to wear the iconic four-leaf clover that has been associated with the Milan-based automaker for over nine decades.

Story has it Ugo Sivocci first painted a four-leaf clover on the hood of his RL in 1923 with the hope that it would bring him luck during his next race.  The superstitious action paid off and Sivocci drove the RL to victory in the 14th edition of the Targa Florio at an average speed of 36 mph (59 km/h), an impressive velocity in the 1920s.

What followed is a point of debate among automotive historians.  Some claim Alfa Romeo was so inspired by Sivocci’s victory that the quadrifoglio was adopted as the the team’s official symbol.  Others claim Sivocci routinely painted a quadrifoglio on his own car follow his Targa win and that the team only adopted the symbol as a homage to him after he was killed while driving a P1 on the Monza track in September of 1923.

Regardless, by the late 1920s the quadrifoglio had become ubiquitous on track-bound Alfas and it enabled race officials to quickly distinguish factory-backed race cars from vehicles competing for private teams, including the Scuderia Ferrari. 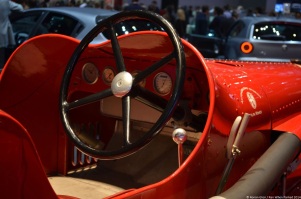